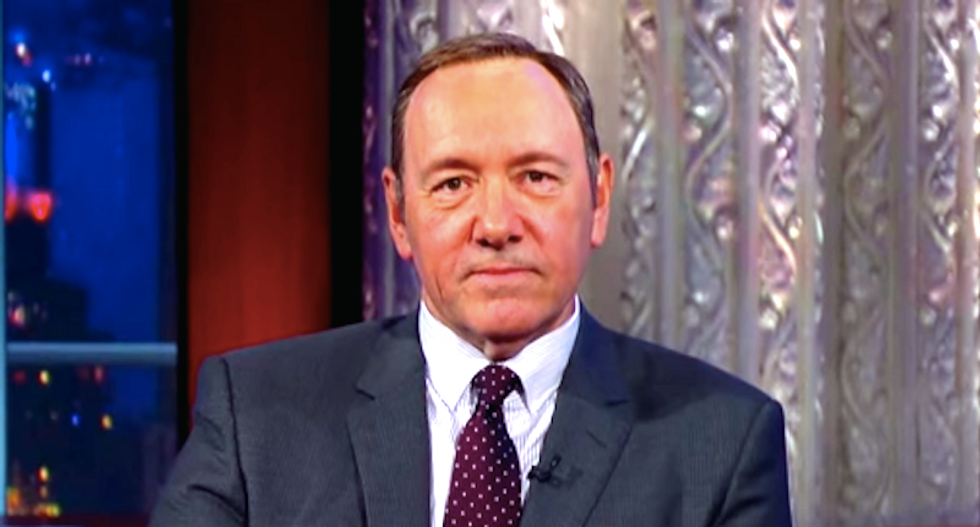 Kevin Spacey plays ruthless and cunning political insider Francis Underwood on the Netflix series "House of Cards," and he frequently reveals his character's diabolical motivations during brief asides to the audience.

The actor appeared Wednesday night on "The Late Show With Stephen Colbert," where the host asked who the actor believed he was addressing when he broke the fourth wall.

"Who do you think you're talking to when you talk right to the camera?" Colbert asked. "Who is that person, is it like a close confidant? Because the person you're actually talking to, of course, are people on a 10-hour Netflix binge sucking on box wine."

"When I'm looking directly into that camera, I'm talking to one person and one person only -- and that is Donald Trump," Spacey said.

Colbert agreed that this explained much about Trump's presidential candidacy.

"I think he's getting the messages you're sending him over the TV," Colbert said.

The host asked Spacey if he ever thought that some of the show's plot lines -- which include murders, adultery and vicious political betrayals -- were too implausible.

"There are times when I'll leave the set and, you know, we'll have shot a particular storyline, and I'll think, man, this is really pushing it," Spacey admitted. "And then I get back to the hotel and I turn on the news."

He punctuated his comments with a profane remark that earned admiring applause from both Colbert and his audience.