Kim Davis doesn't get why gays want marriage licenses: 'I don't think dignity is guaranteed in the Constitution' 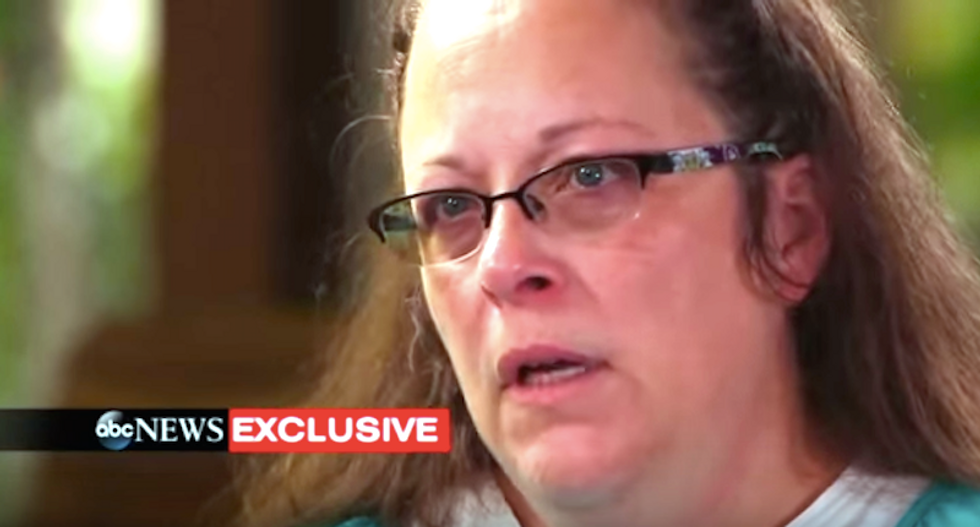 Kim Davis says you have a right to call her Hitler and a hypocrite -- but that doesn't mean she likes it.

Davis, the elected Rowan County clerk, said she has refused to issue marriage licenses to her own friends in same-sex relationships, saying that even that would violated her religious beliefs.

“I can't put my name on a license that doesn't represent what God ordained marriage to be," Davis said.

Davis, who was jailed for six days on contempt of court charges and could face additional time behind bars if a judge determines she violated a court order by altering marriage licenses issued by her office.

“My constituents elected me, but the main authority that rules my life is the Lord,” she said.

Davis said she was surprised her refusal to follow the U.S. Supreme Court ruling in Obergefell v. Hodges -- and multiple court orders and directives from the governor -- had made her a household name.

"I’ve been called things and names that I didn’t even say when I was in the world," said Davis, who became a born-again Christian four and a half years ago. "Those names don’t hurt me. What probably hurt me the worst is when someone tells me that my God does not love me or that my God is not happy with me, that I am a hypocrite of a Christian."

Davis, who has been married four times and had children from an adulterous relationship, admits that she hasn't always been a "good" person -- but she said those past misdeeds no longer matter.

Davis said she doesn't understand why same-sex couples would say they "finally felt human" after receiving the marriage licenses she had denied them.

"I feel really sad," she continued, "(that) someone could be so unhappy with themselves as a person that they did not feel dignified as a human being until they got a piece of paper. I mean, there's just so much more to life than that.”

Watch portions of the interview posted online by ABC News: