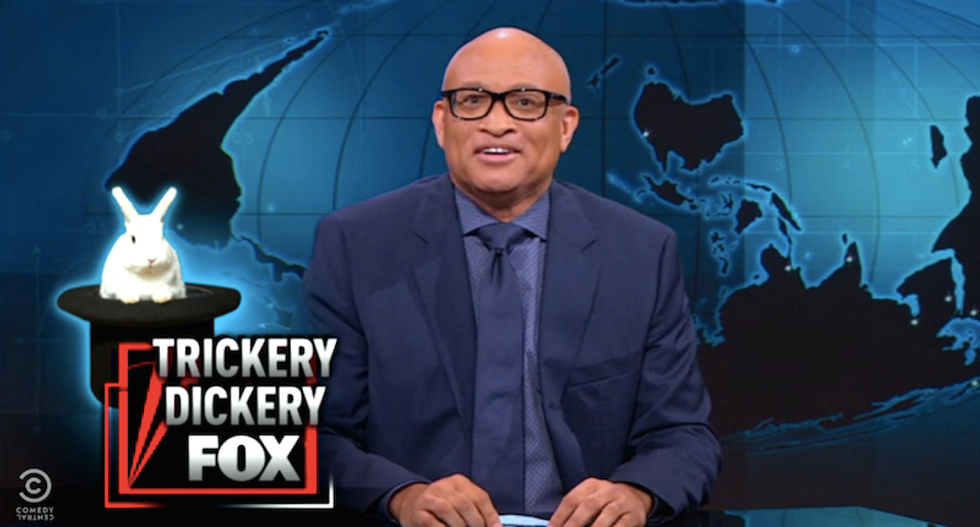 The "Nightly Show" host reported that 58 percent of Americans believe there is a war on police -- and Wilmore is concerned about that possibility himself because he has law enforcement officers in his family.

But then he learned that 2015 is on pace to be one of the safest years for law enforcement in decades, and the rate of officer deaths in the line of duty has been steadily declining since the mid-1970s.

"You may be wondering how that happens," he continued. "The answer? Magic. And the magician? Fox News."

Wilmore, an accomplished magician himself, explained how Fox News promotes false narratives by first stating a "bullsh*t premise," and then by giving the topic the conservative news network's highest honor: "official war status."

"Damn, Fox is going all-in on this war premise," Wilmore said, after watching a litany of anchors and guests promoting the narrative. "I haven't seen Fox News this excited since the invention of 'blonde.'"

Wilmore explained that Fox News, having "hooked" their audience with the alarming claims, brought in so-called experts to blame civil rights protesters for the bogus increase in police killings.

The network next used video showing protesters at one demonstration chanting "pigs in a blanket, fry 'em like bacon" to support its claims, and Wilmore pointed out that Fox News repeatedly reported the isolated incident to overstate its relevance.

"I'm not a spokesperson for the Black Lives Matter movement, but I'm pretty sure their agenda is for police to stop killing unarmed black people," Wilmore said. "The fact that we even need that movement is insane. The fact that you're trying to presto-change it into a war on cops is even more insane."

"Obama?" Wilmore said. "You're really blaming this on Obama? You have to be f*cking kidding me!"

"I have to tell you guys this, as someone who loves the art of illusion, I despise Fox's agenda -- but I so admire their craft," he added.