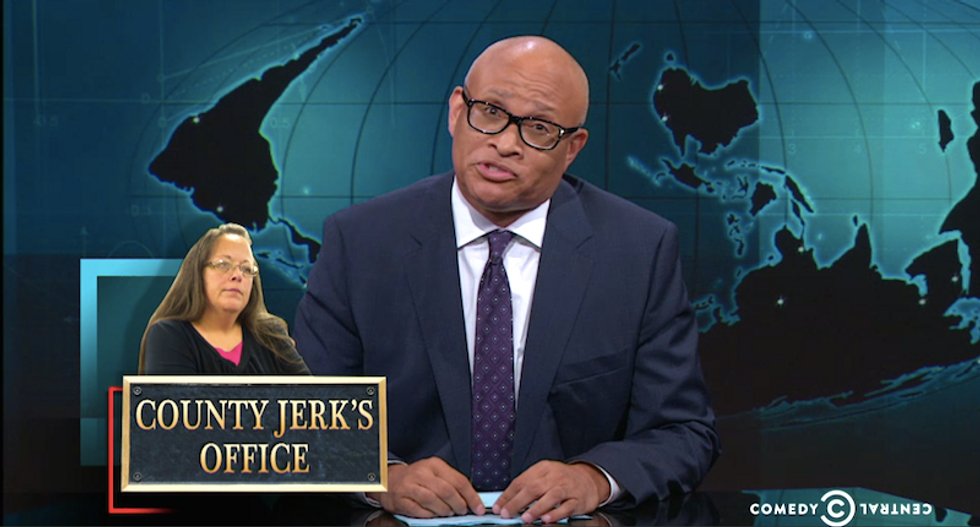 Larry Wilmore compared the celebration that greeted Kim Davis upon her release from jail to a Ku Klux Klan rally.

"I don't know about you guys, but when I see a group of people from the South with white crosses cheering to not allow people their constitutional rights, it kind of just gives me a tingly, lynch-y feeling," he said.

Wilmore said Tuesday on "The Nightly Show" that the Kentucky county clerk's supporters had twisted logic and history to claim Davis was a martyr who was jailed for simply expressing her religious views.

"If speaking her mind hurts other people, that's not brave -- it's bullsh*t," Wilmore said.

"Why is speaking your mind a quality admired and rewarded above all others right now?" he continued. "Doesn't it seem like that? I mean, it doesn't matter that Donald Trump called Mexicans rapists -- he was 'speaking his mind.'"

Davis, who was elected to her governmental position by voters in Rowan County, has refused to issue marriage licenses to same-sex couples because she claims that would violate her religious beliefs.

"No one cares about your beliefs," Wilmore said. "The whole point of a government job is to not give a damn. That's why you work for the government."

Davis supporters have compared the defiant government official to various civil rights heroes -- including Martin Luther King Jr., who wrote "Letter from Birmingham Jail" while held on trespassing and other charges related to civil rights protests.

"Let me see if I've got this right: A lady forcing her religious beliefs onto an entire community by refusing to do her job reminds you of King's 7,000-word meditation on non-violence and racism in the church," Wilmore said. "I haven't seen someone miss the point so dramatically since they made Robert DeNiro the intern in 'The Intern.' It just doesn't make sense."

King was treated harshly by racist guards while jailed, but jail officials in Kentucky allowed Republican presidential candidate Mike Huckabee to set up a stage just feet from the detention center's front door so Davis could hear the rally outside before her release.

"Martin Luther King was actually in opposition to the church's unwillingness to support the oppressed," Wilmore explained. "Kim Davis, on the other hand, is using her church to oppress people even more."

He said former Alabama Gov. George Wallace -- who famously defied the U.S. Supreme Court order to de-segregate the University of Alabama -- was a more apt comparison to Davis.