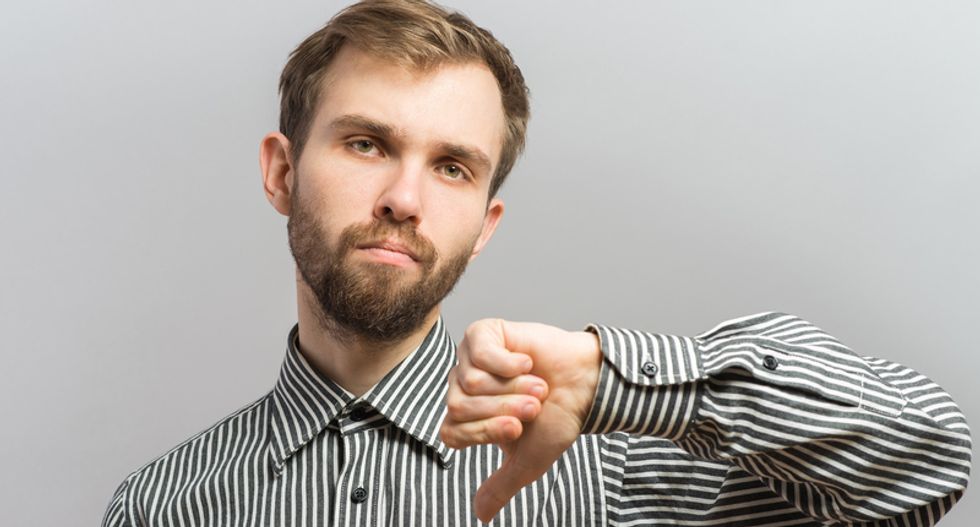 If you are a woman who has already had sex with a man that resulted in a hymen-busting, you may be one lucky gal who has lessened her chances of possibly marrying a potentially abusive whiny man-child who will someday be the subject of a restraining order or three.

Congratulations. Yes, you should have another glass of wine.

You should also go out and have celebratory hot sex with any man you choose to have sex with as insurance because you have been spared a lifetime of regret and disgust and explaining to your kids that "daddy wasn't always that way" and "stranger danger" also includes him.

According to the  No Hymen, No Diamond "community," if you slutted it up in the past, neck-bearded losers who smell like a gym bag left in the hot car trunk since July will not put "a ring on it."

Despite the fact that this guy is never going to get a hand-job with that kind of attitude, I find his views interesting in a why-wouldn't-she-get-slutty-with-me-slut-shaming-way, and wish to hear more:

"If you are not fulfilling her emotional needs at this point in time, and constantly thereafter, then you are fucked. You can't let your guard slip.Taking a man's life is thing, taking his heart is everything."

Yes, sad man who has been nutted by reality, you have suddenly gone from Warrant's "Cherry Pie" to Michael's Jackson's "She's Out Of My Life" because you should have known better than to marry a used woman --- even a low mileage one -- when there is no CarFax for someone's sexual history.

So why not find a daisy-fresh virgin whose vagina still has the shrink-wrap on it and who is unaware that the occasional 3 minutes of pleasure, a lifetime of servitude, and a yearly Mothers Day brunch outing with a petulant dullard is not the pinnacle of human achievement and bliss.

Of course we are not sure how exactly the "no hymen" policy is enforced before a trip to Jared -- or Claire's if he's on a budget because of his fantasy football league -- can be booked. We would suggest that, if you catch yourself asking "Is that a speculum in your pocket or are you just happy to see me,"  you should follow that up by making an emergency call to Uber.

There is little on the No Hymen, No Diamond page to suggest that this it is somehow religious based or a Duggar family mock Facebook account aimed at the daughters explaining that side-hugging is second base in the eyes of the Lord -- and quit tempting your brother, you filthy whore slatterns. It just seems to be some sad loser, or losers, who hate feminists who are THE WORST because they get in the minds of suitable mates and do this to their beautiful minds:

"The modern women can no longer cook, they no longer want children and they are no longer warm, tidy and loving creatures who think spending time with their family is a good thing. They are probably too "independent" and "strong" to even have a family of their own. The only thing modern women have to offer men today is sex. So instead of being loving housewives who cook and raise children, they are reduced to being sexual objects only - and they are so messed up physiologically."

But there is still hope for you ladies, because it is not just you ...or him. It's everyone in this "mixed up, muddled up, shook up world (except for Lola)"

"True women are all my equals, whom I adore and respect, but I see modern women more like disgusting, primitive and disturbed animals, or subhuman at best. And those who think I am some male-chauvinist who only criticize modern women here are actually wrong, because this is not only an attack on modern women, but it is an attack on the modern world as a whole, and modern men are certainly no better. Most modern men should be grateful even for the fact that they have not yet been put to sleep, like dogs often are when there is something seriously wrong with them."

He seems like he would be a lot fun at parties.

Showing up alone, of course. And leaving that way too...