Malawi teacher accused of trying to sell albino girl for $10,000 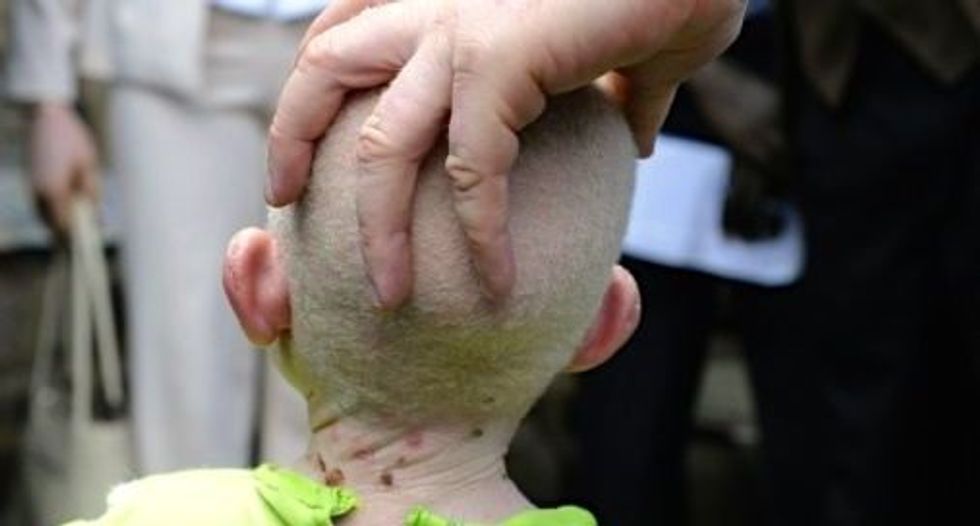 A Malawian teacher suspected of attempting to sell an albino schoolgirl for $10,000 was arrested Tuesday, police said, as the country battles to stop albino killings fuelled by superstition.

Primary school teacher Phillip Ngulube was with the girl when he was arrested in the northern city of Mzuzu and has been charged with abduction with intent to murder, police spokesman Maurice Chapola told AFP.

Ngulube was "caught by police on his way to selling the girl to an alleged Tanzanian businessman for six million Kwacha ($10,000)," said Chapola, adding it was likely she would be killed for her body parts.

The suspect told police the high school student was his girlfriend.

Albinos have white skin and yellow hair, a result of an hereditary genetic disorder that causes the absence of pigmentation in the skin, hair and eyes.

They are killed regularly in some African countries for their body parts ? from genitals to bones ? which are used in witchcraft rituals.

The plight of people with albinism has worsened in recent years, according to UN and police figures, with concerns that the October election in Tanzania this year will prompt more attacks as politicians seek luck at the ballot box.

A complete albino skeleton is said to be worth as much as $75,000, according to the Red Cross.

Since a surge of attacks against albinos in December, the UN estimates that nine have been killed in Malawi.

In June, Malawi launched a probe to establish the root causes of albino killings and identify who buys the body parts in the country and in neighbouring Tanzania and Mozambique.

The results of the probe have yet to be published.

Several Malawians are awaiting trial in connection with albino-related crimes, including killings, abductions and possession of albino bones.

CNN has obtained surveillance footage showing a group of Trump allies inside a restricted area of an elections office in Coffee County, Georgia.

As reported on Tuesday morning by Drew Griffin, the footage shows a team of operatives who were working for pro-Trump attorney Sidney Powell, as well as Cathy Latham, who served as a fake Georgia elector for the Trump campaign.

Africa offers a vast underdeveloped market for global sports, with thousands of athletes ready to join international ranks if only there were major investment, industry leaders and stars say.

But more government and private-sector partnerships are needed to turbo-charge African sports and bring young players into top-tier leagues of football, basketball and even American football, participants at a business forum said Monday.

At least 11 schoolchildren died in an air strike and firing on a Myanmar village, the UN children's agency said, an attack the country's junta said targeted rebels hiding in the area.

Myanmar has been in chaos since the military seized power in a coup in February last year, with nearly 2,300 civilians killed in a crackdown on dissent according to a local monitoring group.