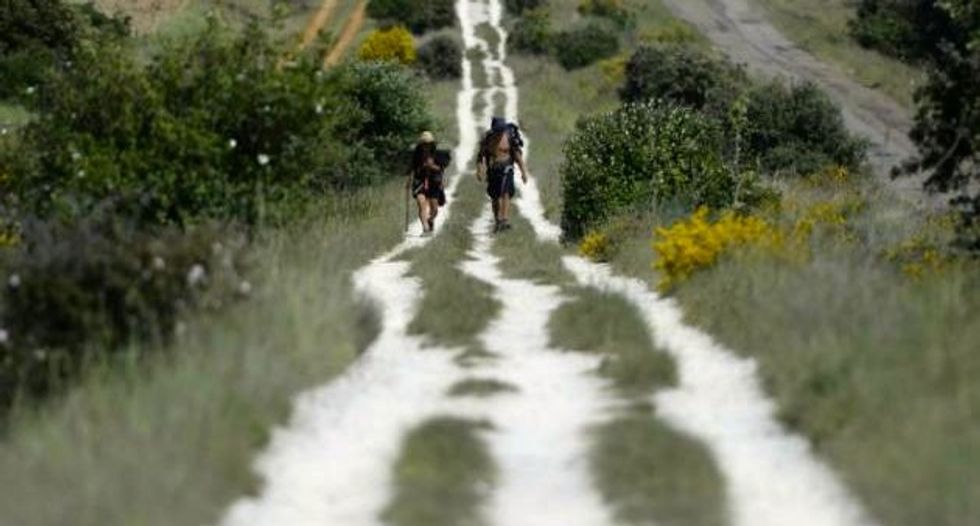 AFP/AFP - Pilgrims walk on the Way of Saint James trail near the village of Santa Catalina de Somoza, close to Astorga, on May 29, 2015

A Spanish judge Monday charged a man with killing a US woman on a pilgrims' hiking trail as authorities sought to identify a body thought to be hers, officials said.

A judge in the northern town of Astorga ordered the suspect to be held in custody without bail, the court said in a statement.

"He is charged with homicide. When questioned by the judge, he pleaded his innocence," the statement said. The identity of the man was not given.

Police arrested the man on Friday after months of investigations and found a body resembling that of Denise Pikka Thiem, 41, from Arizona, Interior Minister Jorge Fernandez Diaz said at the weekend.

Thiem disappeared in April while walking the Camino de Santiago or Way of Saint James, a pilgrim trail in northwestern Spain.

Hundreds of thousands of tourists and Roman Catholic pilgrims hike the trail each year, staying at hostels on their way to the cathedral city of Santiago de Compostela and the shrine of St. James.

Thiem was last heard from on April 4 when she sent a message to a friend saying she was at a point on the trail near Astorga in the Galicia region.

The man was arrested at a property near Astorga, officials said, without identifying him. Spanish media reported that he was a 39-year-old man.

Officials said experts were carrying out tests to identify the body, which was found largely decomposed and hidden under branches.