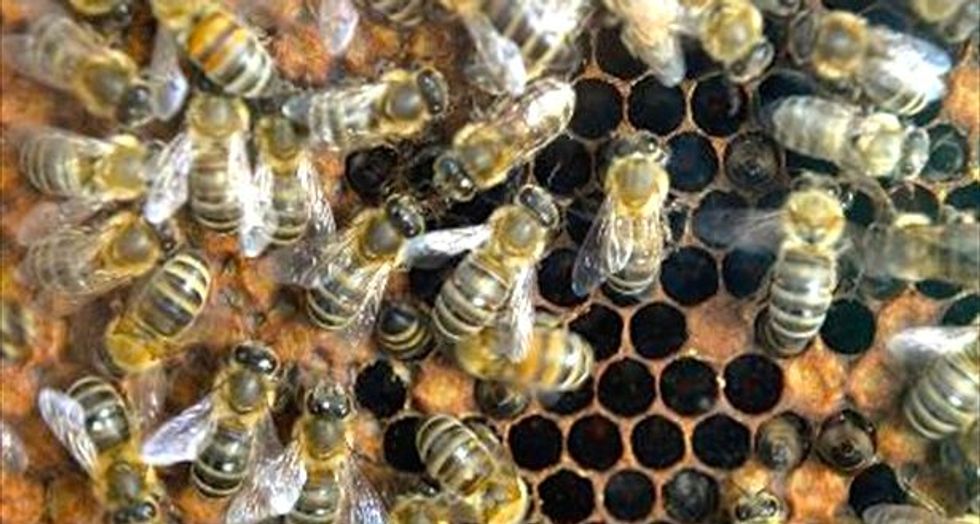 Bees are pictured on a honey gofer in Bucharest on April 4, 2014 [AFP]

Thousands of bees swarmed through a suburban Phoenix neighborhood, stinging six people, including four who had to be hospitalized, before firefighters drove them off with foam and fire hoses.

One of the victims in the Tuesday evening bee attack in Gilbert, Arizona, was a firefighter who was stung 40 to 50 times after the insects got inside his special protective hood, said Mike Connor, a deputy chief with the Gilbert Fire and Rescue Department. The firefighter was among those taken to a hospital for treatment.

The bee swarm sent residents scrambling into their homes, where they were advised to stay by authorities as crews closed down a residential street to battle the amorphous cloud of insects.

Connor said it was not clear what prompted the bees to become aggressive but that it was not uncommon in Arizona for hives to be found in neighborhood trees and that one might have been disturbed somehow.

Three people, two of them children, fled into homes after they were stung and firefighters were at first unable to help them because of the swarming bees, Connor said.

"Our crews were told that a couple kids had been stung but there were so many bees they couldn't get inside the home," he said. "Basically they just started putting foam on the front of the house. It wasn't a hive, they were swarming."

Firefighters eventually were able to enter the home through a back door.

Five residents were stung and three of them - a 3-year-old boy, a 14-year-old girl and a 22-year-old woman - were hospitalized. All of the victims were doing well by Wednesday morning, Connor said.

Video by local TV stations showed crews clad in protective gear spraying foam on homes and trees as they tried to drive away the bees. Connor said most of the insects eventually moved on, although some died from the foam attack.

He advised residents not to mess with bees.

"If you find a hive, leave it alone," Connor said.