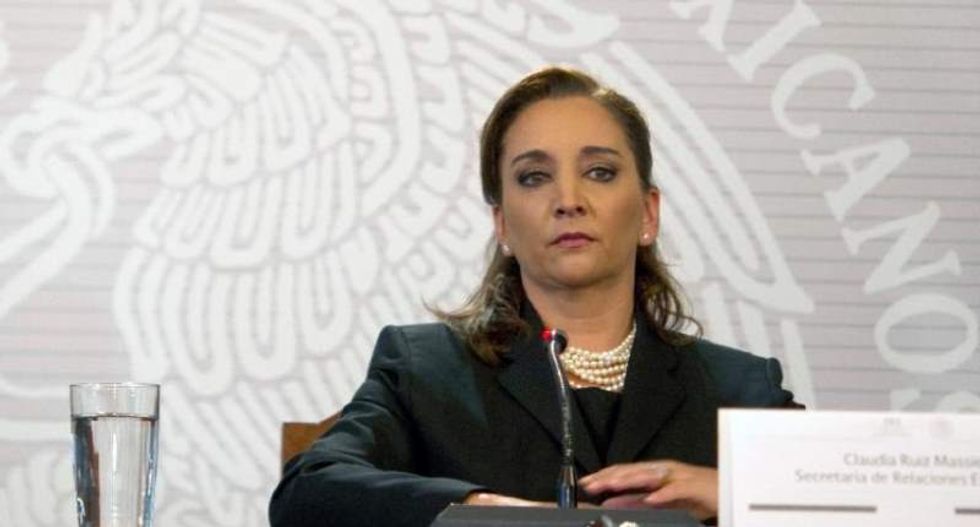 Mexico's foreign minister headed for Cairo Tuesday with relatives of some of her country's eight tourists mistakenly killed by Egyptian security forces, demanding an urgent enquiry into an "unjustified attack".

Claudia Ruiz Massieu said she wanted answers about the strike that killed 12 people.

The bodies of six more Mexicans killed in Sunday's attack were identified Tuesday, raising the number of dead from the Latin American nation to eight.

The foreign ministry in Mexico City said Mexican diplomats "had access to the remains of victims" from the attack "and were able to confirm that they correspond to the six Mexicans who were part of the group of tourists".

President Enrique Pena Nieto, who has called on Egypt to conduct a thorough and swift investigation into the attack, confirmed the new death toll.

"To all their relatives and loved ones, I give them my solidarity in these difficult moments," Pena Nieto wrote on Twitter.

Egypt said the tourists entered a restricted area in the vast Western Desert and were "mistakenly" killed as security forces chased jihadists who had abducted and beheaded an Egyptian.

Ruiz Massieu said Monday six Mexican survivors told their ambassador they had "suffered an aerial attack with bombs launched by a plane and helicopters".

"We face a terrible loss of human lives and an unjustified attack that obligates us to make the protection of our citizens the priority," Ruiz Massieu said before departing accompanied by relatives of four of those killed and doctors.

She is expected in Cairo at 2200 GMT, a Mexican official told AFP.

She said she would talk to top Egyptian officials to "clear up the circumstances of this deplorable event".

The sister of Luis Barajas Fernandez, one of the dead, said he had been travelling with his wife Carmen Susana Calderon, who was wounded, and a niece.

"We are trying to be calm ahead of what comes next, the repatriation of his remains," Ana Barajas told Milenio television.

President Abdel Fattah al-Sisi on Tuesday called his Mexican counterpart to say Egypt "stood alongside the victims' families" and was giving "all necessary help" to the wounded, a statement said.

The incident has proven embarrassing to the Egyptian security forces which regularly claim to have killed dozens of militants in air strikes, tolls that are difficult to independently verify.

Hassan al-Nahla, head of Egypt's tour guides union, said the tourist group had received all the required permits and set off with a police escort from Cairo to Bahariya oasis, roughly 350 kilometres (220 miles) away.

About 80 kilometres from their hotel, they veered two kilometres into the desert for lunch, he said in a statement.

The place they chose for their picnic was a regular tourist stop, Nahla said later on television.

"I don't blame anyone but I ask who is responsible for coordination, and why was it absent?

"If the military is dealing with terrorists, why were the authorities who issue permits not notified? Why was the tourism ministry not notified so it could coordinate with the tourism companies?"

Nahla told AFP the area where they stopped had never been a restricted zone.

"There was no notification on the ground, and no coordination," he said of the security operation.

The incident is likely to raise further fears for Egypt's vital tourism industry, which has struggled to recover from years of turmoil.

Many Egyptians on social media have criticized the government for suggesting the tourists were at fault for straying into a restricted zone.

The Western Desert is popular with tour groups, but is also a militant hideout, with Western embassies warning against non-essential travel there.

Last month, Egypt's branch of the Islamic State group beheaded a Croatian oil worker who was abducted near Cairo, at the edge of the Western Desert.

IS in Egypt said on Sunday it had "resisted a military operation in the Western Desert" and published pictures of its fighters apparently engaging the military.

Egypt has struggled to quell a jihadist insurgency focused mainly in the Sinai Peninsula in the east since the military overthrew Islamist president Mohamed Morsi in 2013.

The military last week launched a wide-scale campaign to uproot militants in the peninsula, claiming to have already killed more than 200 jihadists.

Nine soldiers, including one killed in a roadside bombing Monday, have died in the operation, it said.

Cairo says hundreds of police and soldiers have been killed, many in attacks claimed by IS's Sinai Province affiliate which pledged allegiance to the main group in Iraq and Syria last year.