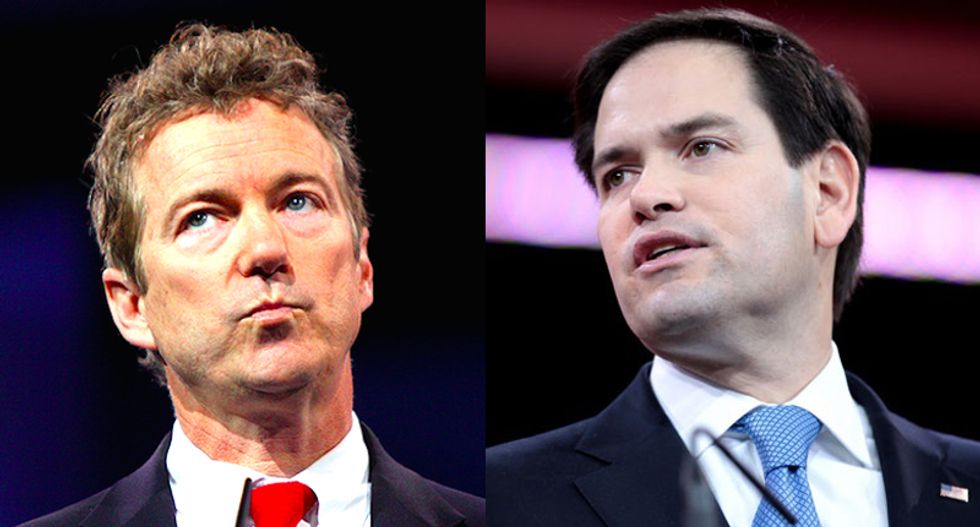 High ranking aides from two struggling  GOP presidential campaigns got into it in a bar at a Michigan resort Thursday night,with one staffer getting punched in the face, reports the Detroit News.

Writing on Facebook, Rand Paul's national political director, John Yob, claims he was standing in a bar when a staffer on the Marco Rubio campaign walked up to him and punched him without provocation.

"Last night I went to a bar on Mackinac Island for the GOP Mackinac Conference. I ran into a guy named Rich Beeson, who frankly I didn't even know who it was at first because he isn't relevant in our political world. Anyway, he is Marco Rubio's national campaign manager," Yob wrote. "He literally physically assaulted me by punching me in the face. The state police are looking for him. I have it on video, from multiple angles. This will play out in the national media in the next few hours."

Yob, who has yet to post the video, has since called for the Rubio campaign to fire Beeson -- who is actually Rubio's deputy campaign manager and previously served as the political director for the Republican National Committee and on Mitt Romney's unsuccessful 2012 presidential run.

The Rubio campaign has yet to respond.

According to a local blogger and political activist who was in the bar, he saw the thrown punch, saying Beeson, "missed a full on shot but still struck Yob’s in the face with a powerful blow near the jaw.”

Surrogates for both campaigns are in Michigan for a planned "leadership conference" with Republican Governor Rick Snyder.

This is not Yob's first brush with physical assault.

In April his wife, Erica Lorraine Yob, pleaded no contest to a misdemeanor charge of domestic violence against her husband. As part of her plea, the wife of the political consultant was ordered to attend drug and alcohol counseling. Details of that assault were not released.