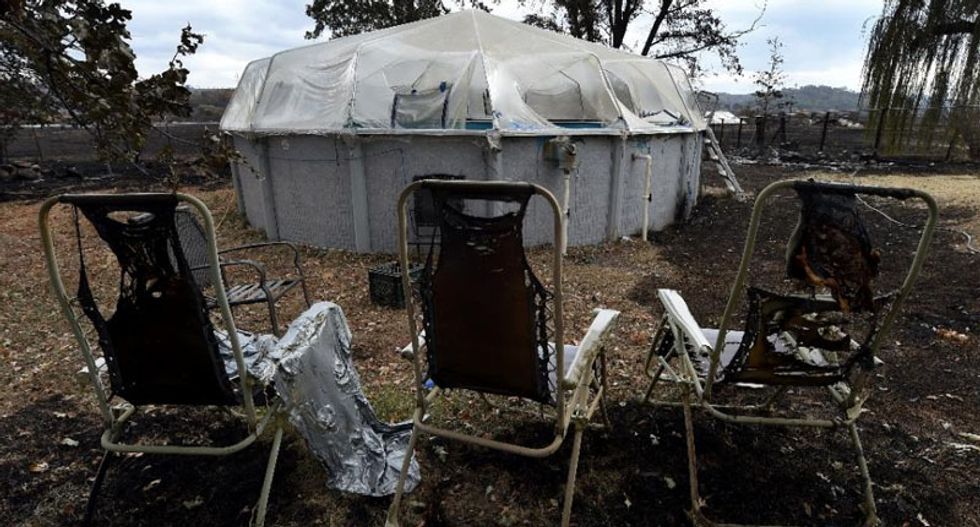 Burnt chairs stand in front of a swimming pool beside a fire destroyed house after the Valley Fire swept through the town of Middletown, California, on September 16, 2015 (AFP Photo/Mark Ralston)

More than 1,400 homes have been destroyed in two of the biggest wildfires burning in California, officials said Sunday, making them among the worst ever in the most populous US state.

The death toll rose to six after a person was killed in a new fire south of Monterey.

Responders were shifting to damage assessment for the Valley and Butte fires, which have each burned more than 70,000 acres (28,000 hectares), as they were approximately half and 70 percent contained, respectively.

Mandatory evacuations for the Butte fire, burning about 100 miles (160 kilometers) east of Sacramento, were lifted Sunday, as were evacuations for some areas affected by the Valley fire, north of Napa Valley's wine country.

The damage assessments gave long-awaited answers to some of the thousands of displaced residents wondering whether they would have homes to return to.

But ten large fires -- including two new ones -- remained active in the state, according to the California Department of Forestry and Fire Protection (CalFire), which said 10,500 firefighters were currently deployed.

One resident was killed in a new fire that sprang up Saturday afternoon south of Monterey. Ten homes have been destroyed or damaged so far by that 1,200-acre (485 hectares ) blaze, which was only 10 percent contained Sunday, CalFire said.

Three residents have been killed and four firefighters injured in the Valley fire, which began last Saturday.

And another two civilians were killed in the Butte fire, in the Sierra Nevada foothills, but residents were being allowed to gradually return to their homes Sunday.

CalFire spokesman Daniel Berlant said those two residents killed had chosen to remain in their homes after evacuations were put in place.

"Our firefighters this week were forced to stop fighting the fire and went into rescue mode just trying to get people to evacuate," he told Fox News.

As the damage was tallied Sunday, CalFire said the Valley and Butte fires had become the sixth and seventh worst, respectively, in the state's history, after they razed parts of small, rural towns.

By contrast, the most damaging fire, 1991's Tunnel fire, tore through the heavily populated hills above Oakland, killing 25 and destroying some 2,900 homes and apartment buildings.

Local authorities say hot and dry weather is hampering efforts to control the ongoing blazes, which have thrived in drought-parched California.

"A warming and drying trend is under way, and a light wind pattern will enhance the warm and dry conditions until Monday" in Northern California, CalFire said in a statement.

Several other major fires are burning in the state's national forests and other federally operated lands, though with less direct threat to homes or residents.