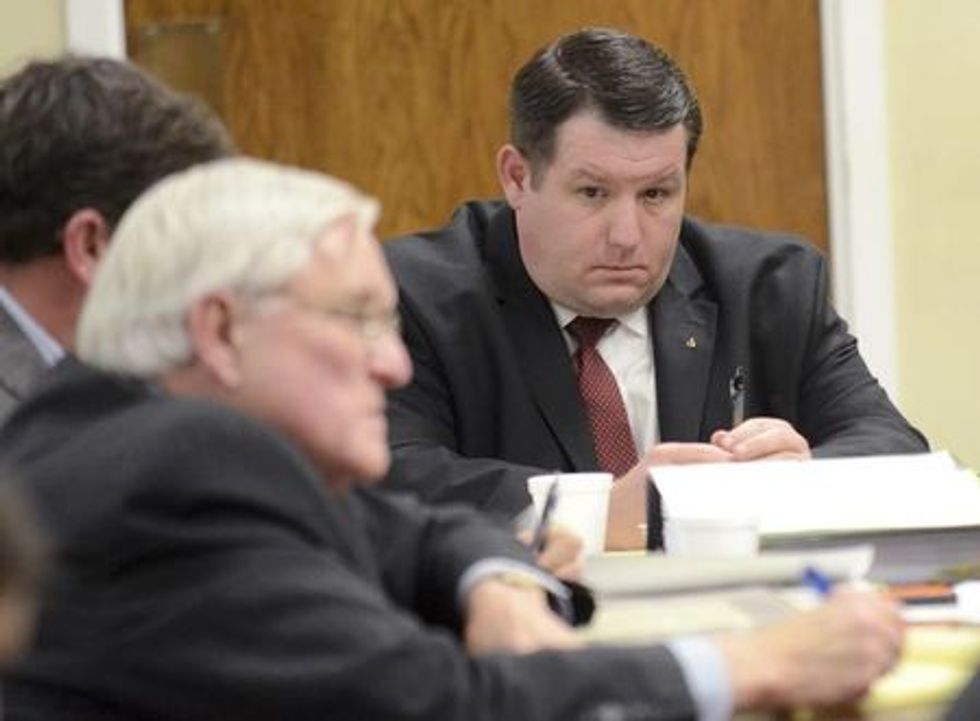 Former Eutawville Police Chief Richard Combs sits with lawyers on the second day of testimony in his trial for the murder of Bernard Bailey in Orangeburg, South Carolina January 8, 2015. REUTERS/The Times and Democrat/Larry Hardy/Pool

South Carolina prosecutors on Tuesday dropped a murder charge against a white former South Carolina police chief after he pleaded guilty to misconduct in the 2011 death of an unarmed black man over a traffic ticket.

Combs received a suspended sentence of 10 years in prison, with one year of home detention and five years of probation.

Combs was charged with killing 54-year-old former prison guard Bernard Bailey in 2011 after they argued over a traffic ticket issued to Bailey's daughter.

The case is one of several police killings of black men across the country that have sparked protests and renewed a civil rights movement under the banner of "Black Lives Matter."

Bailey was killed when he visited town hall to speak with Combs about the traffic ticket.

Instead, prosecutors said, Combs tried to serve Bailey with an arrest warrant for obstructing justice during his daughter's stop, where Bailey was present.

Combs tried to prevent Bailey from driving away after their argument, firing three shots that struck Bailey in the chest, abdomen and head, prosecutors said.

The defense argued that Combs feared he would be run over and was in reasonable fear for his life.

"In my 20-plus years as a prosecutor, I don’t know that I have had a more polarizing case,” prosecutor David Pascoe said on Tuesday, noting the two hung juries.

He said he was planning to seek a third trial before the police chief’s attorney approached him about a plea deal.

Defense attorney Wally Fayssoux told the court: “No one will ever win this. Everybody has suffered tremendously on both sides of it.”

Bailey’s siblings highlighted his devotion to his family. He was killed less than a mile from where he grew up in a town where he was widely known for delivering groceries and newspapers.