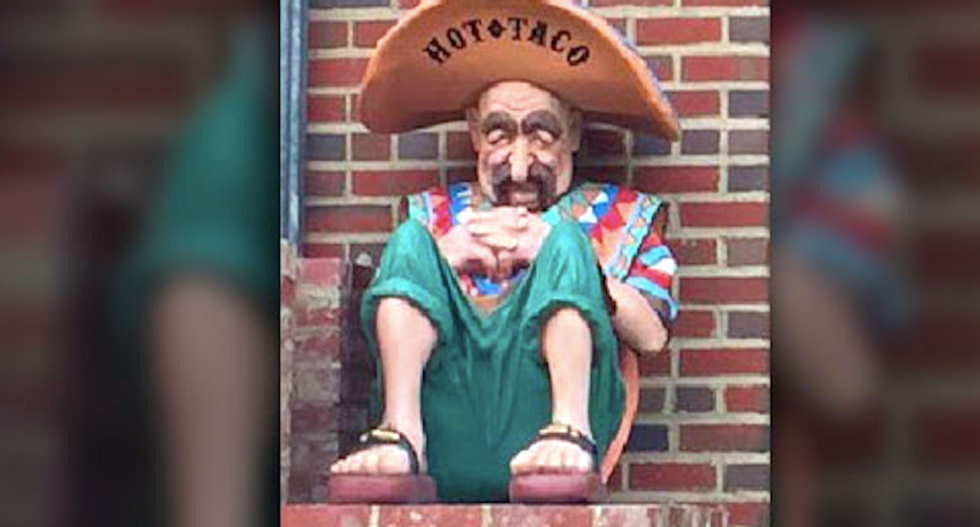 Civil rights groups in North Carolina are asking a newly opened Mexican restaurant to take down a pair of statues that depict a racist stereotype about Latinos.

"This particular image of the dozing Mexican -- the quote-unquote lazy Mexican -- you know is probably one of the most of the popular images, derogatory images, for Latino culture," said Amalia Deloney, who launched a petition drive to encourage the owners to remove the statues. "This is something I was certain, you know, had been dealt with, you know -- I didn't expect to see it in 2015. I didn't expect to see it in front of a restaurant so prominently displayed."

Fast-food chain Taco Bell originally depicted a barefoot boy sleeping under a sombrero, and many of its restaurants put statues of the boy outside, but the character was phased out decades ago, although the sombrero remained a part of its branding for at least a few years longer.

The Latin American Coalition joined Deloney's protest, saying the restaurant was perpetuating a "harmful stereotype" that suggests Mexicans are lazy.

"Now more than ever, Charlotte cannot afford to display such racist symbols," the organization said in a statement. "We must honor the dignity and contributions of all immigrants at a time when hateful, xenophobic rhetoric has consumed the national public debate on immigration."

Deloney is originally from Guatemala, but has spent most of her life in the U.S. -- including the last three in Charlotte?

"I love Charlotte," she said. "Like most people, I want to feel like this is home and I belong -- and in so many ways I do -- which is why it was so shocking and disturbing when I saw the statues in front of Hot Taco because it's completely antithetical to my entire experience in Charlotte."

Janira Castro is among the more than 150 people who have signed the petition.

"I am a restaurant marketing person," Castro said. "I've designed Mexican restaurants in the past, (and) there is a plethora of wonderful images you can use to celebrate this culture that you're using to make money. Even if you don't get it, understand how it makes somebody else feel -- and that's what important."

"It's a man with a sombrero in Mexican garb taking a nap, and that image has been used in a negative way for many, many years," she added. "It does suggest laziness."

However, not all customers are bothered by the statues.

Other customers said they didn't see a problem with the statues.

The restaurant's owners promised a statement earlier this week, but it's not clear they have responded to the controversy.