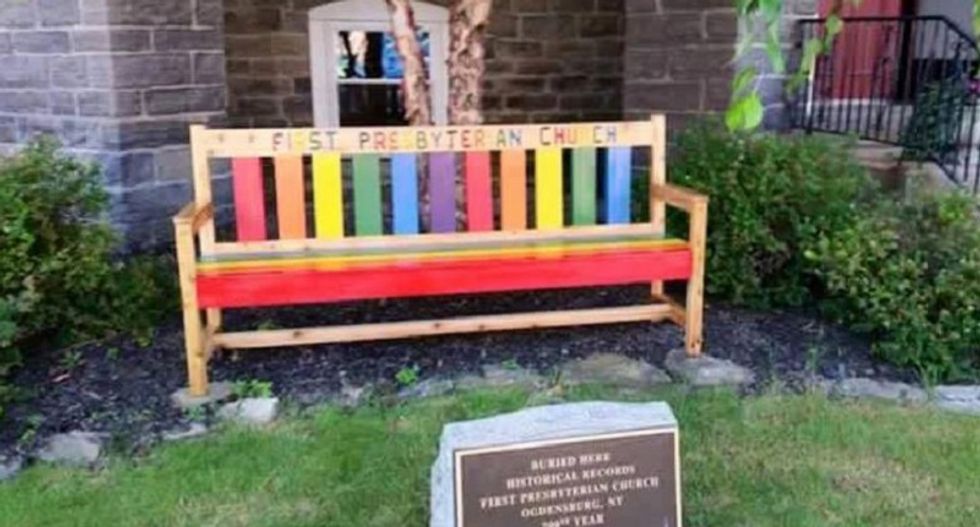 An upstate New York man who saw a rainbow bench sitting outside a church decided he needed to send it "back to hell," Fox28 reports.

Francis "Dominic" Solis, 47, was caught on surveillance video allegedly burning the couch, which was placed outside the First Presbyterian Church in Ogdensburg to symbolize acceptance of the LGBT community. He turned himself in to authorities on Wednesday.

Solis was charged with a hate crime because of his hatred toward the LGBT community, authorities said.

He added the bench reminded him of "what happened to me as a child by adult gay men."

He apparently planned the attack all weekend before carrying it out, telling police he "slowly assembled my kit" which included Gatorade bottles filled with fuel. After torching the bench, he went to a cathedral and sat in front of a statue of Mary and said a prayer, and then went to the park for a cigarette.

His attorney said Solis is mentally ill at his court hearing.

Church officials told the Watertown Daily Times that the bench was handmade and hand painted.

It has been a very sad day at The First Presbyterian Church of Ogdensburg. the bench that was hand crafted with such...

Posted by First Presbyterian Church of Ogdensburg on Monday, September 7, 2015

“We are going to rebuild it,” Rev. Laurena M. Wickham Will told the Times. “This really is a loving church. The people who belong are very good. At least 20 people have already stopped by today to offer their support after what happened.”

Surveillance video posted to YouTube by the Watertown Daily Times below allegedly shows Solis near the church, where he appears to change his clothes.