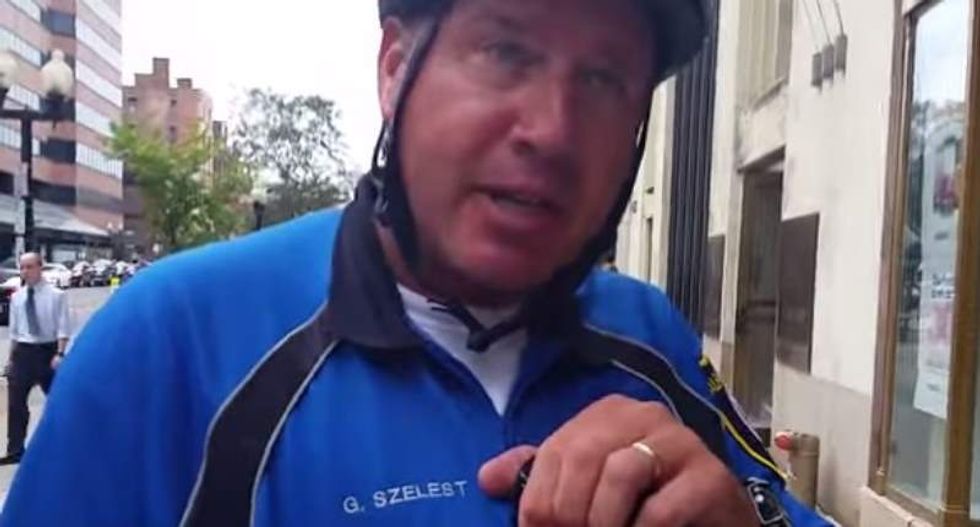 A police officer in Albany, New York is under investigation after he was caught on video accosting a busker and misleading him about local statutes in order to shoo him off the street, the local Times-Union reported.

The footage shows Officer Glenn Szelest telling the artist, Leif Solem, "Go down to City Hall, go see the clerk they'll explain everything to you. First Amendment or nothing."

However, the department told the Times-Union that buskers are not required to have permits to perform, nor is there a law against busking in the city.

"I've done it in Albany for 20 years," Solem says in the footage, only for Szelest to reply, "Well, you haven't done it down here, and you're blocking the sidewalk, OK?"

Contrary to the officer's statement, though, the footage clearly shows Solem standing in front of an empty building. Szelest then points to a t-shirt and calls it "debris," claiming that it does not allow pedestrians to walk through the area.

Szelest then contacts dispatchers, saying he's dealing with "aggressive panhandlers," before telling Solem's girlfriend Cat Jones, "Now you're being confrontational" and asking them for identification. As she asks for the officer's identification, Szelest grabs her phone, ending the video.

Solem then posted the video online, saying Szelest never identified what statute he was supposedly violating.

"We went to city hall as soon as he let me go," he wrote. "No one at city hall knew anything about any ordinance authorizing an officer to chase away a busker, nor is there any need for a permit of any kind, according to the City Clerk's office. And yet, somehow, I have a court date for this and am facing jail."

A department spokesperson confirmed that Szelest was placed on administrative duty after the video came to light. Solem is reportedly organizing a protest event with other artists, slated for Sept. 21.