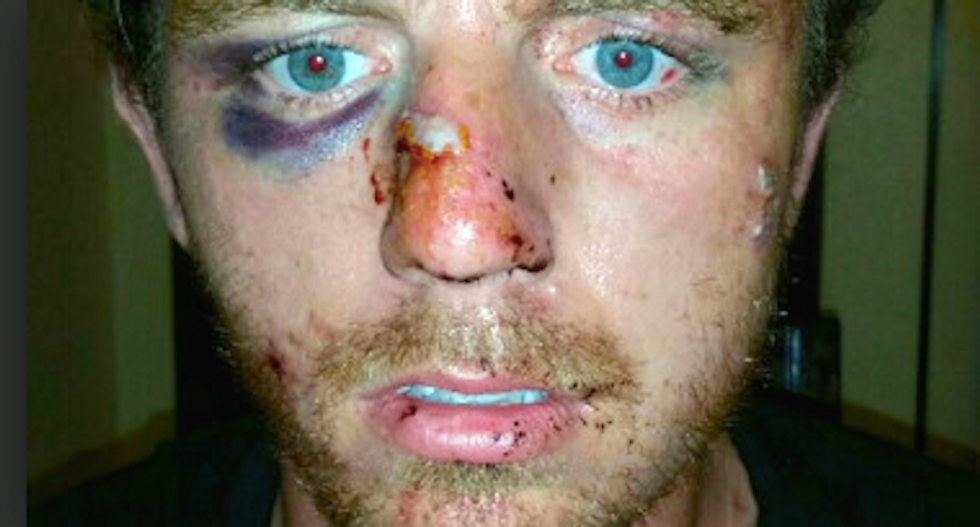 An Oklahoma man suffered a broken nose and other injuries -- but was charged with assault -- when a police officer punched him during an arrest.

Chris Barger said he dropped off a friend at an apartment complex Sept. 7 in Purcell when a police officer approached and shined a flashlight into his car, reported KFOR-TV.

“He begins to shine his light in my car window repeatedly, and after a while, I decided maybe I should get out of the vehicle and ask the officer what the problem is,” Barger said.

Barger got out of the car with one hand in his pocket, and a witness said the officer charged him and began punching.

“I saw the guy get out of the car, walk toward the officer a little bit and stopped," the witness said. "There was a little distance between them, and I saw the officer rush him."

The police report shows Barger raised his hands after the officer pointed his gun at him, but Barger and the witness both said the officer charged toward him and placed him in a headlock.

“By the time he threw me on the ground and hit me a couple times with his elbow, at that point, I was like, 'This isn’t a police officer -- this is just some guy here to kill me,'” Barger said.

The witness said Barger screamed for help as the officer repeatedly punched him.

“They were on the ground for a good two or three minutes, and the guy was screaming, 'Somebody help me, somebody help me, I don’t know why you’re doing this,'” the witness said.

The police report shows Barger knocked the officer's glasses off during the altercation, and he was charged with assault on a police officer.

Prosecutors, however, dropped that charge but filed a misdemeanor obstruction of justice charge in its place.

He had been wanted on an outstanding warrant related to an unpaid traffic ticket, which he resolved after his arrest.

Barger plans to file a complaint against the officer, whose name has not been released.

The police chief said last week he had not spoken with the officer but defended his actions during the incident.

Barger said his cellmates helped tend to his injuries, which included several facial injuries, after he was taken to jail.

“They brought me chairs and helped me sit down," Barger said. "They were better than the police were to me. It’s not the way it’s supposed to be. The police are supposed to be the good guys."