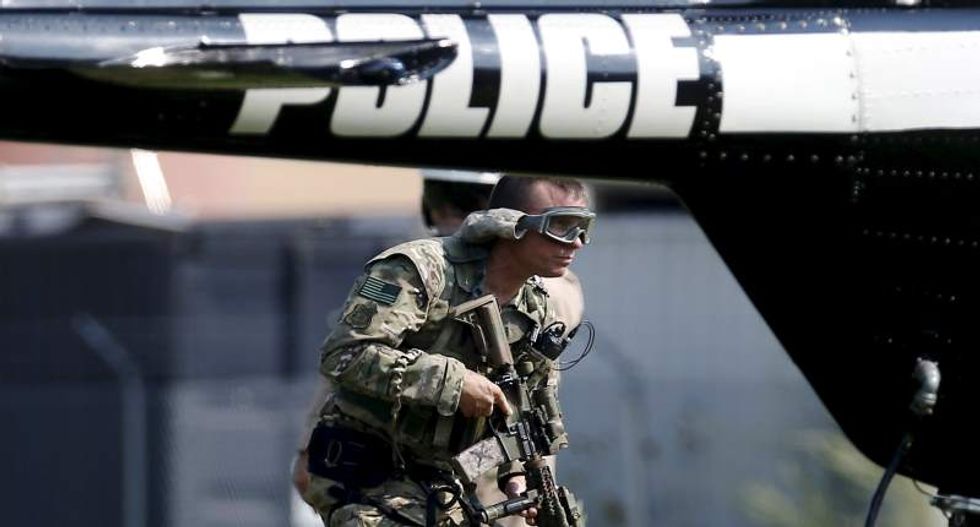 An armed police officer walks throughs a field as authorities take part in a manhunt in Fox Lake, Illinois, United States, on Sept. 1, 2015. Photo by Jim Young for Reuters.

More than 100 police officers using aircraft and canine units were searching northern Illinois on Tuesday afternoon for three suspects believed to be involved in the fatal shooting of a 30-year veteran police officer, officials said.

Officials have only described the three suspects as two white males and one black male. None were in custody as of Tuesday evening, Lake County Sheriff's Office spokesman Christopher Covelli said.

The shooting came days after a county deputy sheriff in Texas was killed in a hail of gunfire while refueling a patrol car at a gas station. A suspect in the Friday shooting was captured and has been charged with capital murder.

Gliniewicz, a father of four boys and a decorated officer, was known around the village as "G.I. Joe" and dedicated to Fox Lake and his fellow officers, Schmit said.

Police with dogs and helicopters continued to search woods and swampy areas after three suspects fled the scene where Gliniewicz was shot.

On Tuesday evening, a group of officers formed a line and disappeared into dense trees and brush in a search for the suspects as bystanders watched across a busy road.

"I've lived here for 30 years and never had to lock my door until now," said Dan Christensen, 64, as a police helicopter circled above a nearby wooded area.

The suspects were on foot when the officer initially made contact with them, and they stole his firearm and other gear before fleeing, media reports said.

Officials ordered commuter trains halted, roads blocked and area schools locked down as they conducted a widespread search in a wooded area about 40 miles (65 km) north of Chicago near the Wisconsin border.

The Federal Aviation Administration established a no-fly zone over the search area.