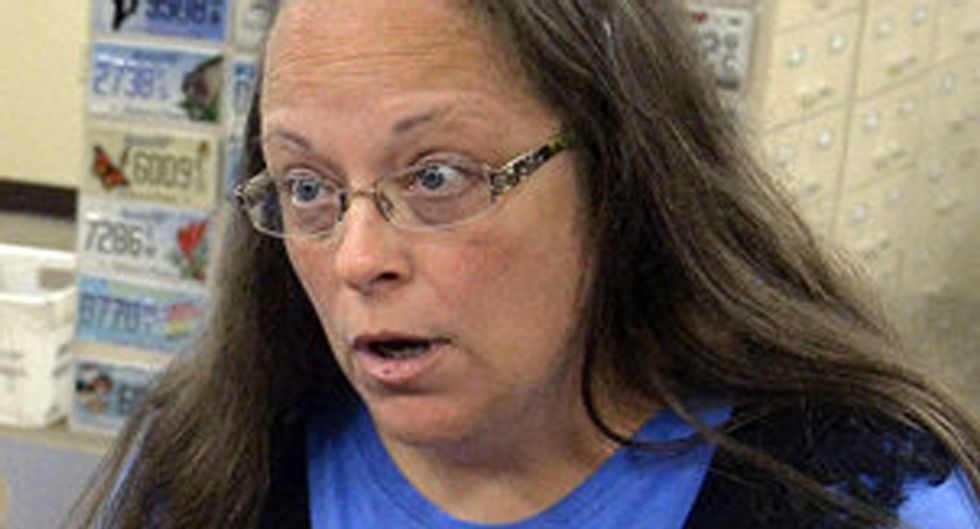 A county clerk from Kentucky who went to jail rather than issue marriage licenses to gay couples made material changes to the forms upon her return and is not in compliance with a federal court order, lawyers for couples suing her said on Monday.

Rowan County Clerk Kim Davis should be ordered to allow the licenses to be issued under the earlier format or the clerk's office should be put in receivership and fines imposed, the attorneys from the American Civil Liberties Union of Kentucky said in a federal court filing.

The issuance of marriage licenses to same-sex couples in Kentucky and other states has become the latest focal point in a long-running debate over gay marriage in the United States.

Davis, 50, has said her beliefs as an Apostolic Christian prevent her from issuing marriage licenses to same-sex couples. U.S. District Judge David Bunning ordered her jailed for failing to issue licenses in line with a Supreme Court ruling in June that made gay marriage legal across the United States.

Davis, who was jailed five days, was released on the condition that she not interfere directly or indirectly with the issuance of marriage licenses. She returned to work on Sept. 14.

Mat Staver, an attorney for Davis, said on Monday she has made a good faith effort to comply with Bunning's order.

"The ACLU's motion to again hold Kim Davis in contempt reveals that their interest is not the license but rather a marriage license bearing the name of Kim Davis. They want her scalp to hang on the wall as a trophy," Staver said.

On Friday, the lawyer for Deputy Clerk Brian Mason, who has been issuing licenses since Davis was jailed, told the court Davis confiscated the licenses upon her return and gave him a document that removed references to Rowan County and Davis' office and required him to list his title as a notary public.

The changes run afoul of Bunning's order, the filing by the lawyers for the plaintiffs said. At the minimum, she has created considerable uncertainty for marriage applicants about their licenses and subsequent marriages, the filing said.

Bunning should direct that licenses be issued under the former format and the office reissue the licenses issued in the past week that could be open to legal challenges, it said.

While Davis has said she does not believe the licenses issued are valid, their legality has not been challenged in court. Bunning has said licenses issues while Davis was jailed are valid and the governor has said he had no problem with altered licenses, if the judge considered them valid.