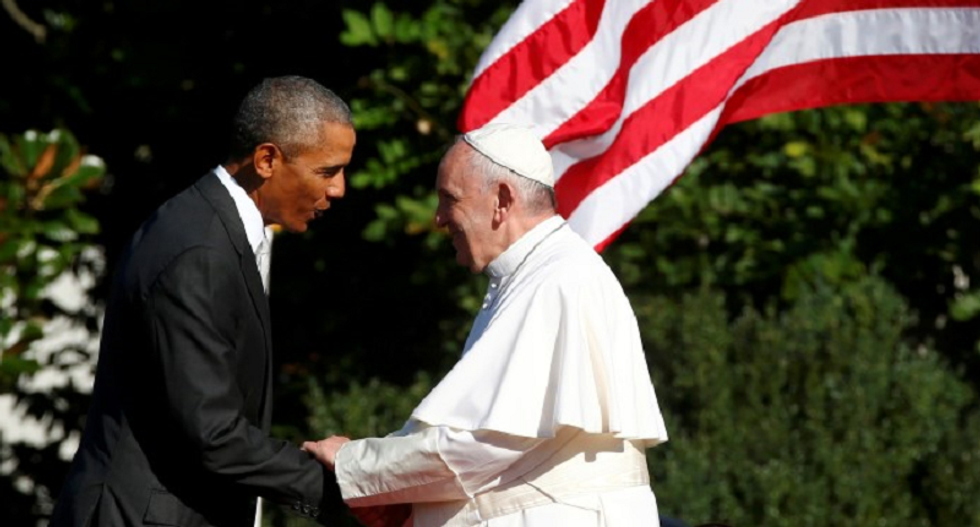 Fresh off his meeting with President Barack Obama, Pope Francis delivers a speech on Thursday to a U.S. Congress led by Republicans who have opposed Obama on issues of importance to the pontiff including climate change and immigration.

Francis, who arrived Tuesday in Washington on a U.S. trip that also will take him to New York and Philadelphia, is set to become the first pope to address a joint meeting of the Senate and House of Representatives at 9:20 a.m. EDT.

The pope is expected to address climate change as well as the need to help migrants fleeing wars, international efforts to resolve conflicts, the U.S. role in helping poorer nations, religious freedom and the "right to life" issues of abortion and euthanasia.

The pope met privately with Obama at the White House on Tuesday, called the Democratic president's efforts against air pollution "encouraging" and said climate change is a problem the world can no longer leave to future generations to address.

In the first papal encyclical dedicated to the environment, Francis in June called for "decisive action" to stop environmental degradation and global warming, squarely backing scientists who say it is mostly man-made.

Global warming is blamed by almost all experts on man-made greenhouse gas emissions, although many U.S. Republicans including some of those running for president in 2016 have heaped doubt on that view.

Gosar said on Wednesday he did not think the pope should "prioritize climate change over speaking out against religious intolerance happening across the world."

In an illustration of the views of some U.S. conservatives, Republican presidential candidate Mike Huckabee said that instead of focusing on the environment, Francis should focus more upon stopping abortion and protecting religious liberty.

Huckabee has embraced a local government official in Kentucky who was jailed after defying a court order to issue marriage licenses to same-sex couples in the aftermath of a Supreme Court ruling legalizing gay marriage nationwide.

"I'm hopeful the pope will encourage us to stop the killing of one million American babies each year and end the criminalization of Christianity in this country, which Obama can control, instead of global weather patterns, which Obama cannot," Huckabee said.

At a time when leading Republicans are advocating building a wall to stop illegal immigrants from Latin America cross into the United States from Mexico, the pope also said he was the "son of an immigrant family" and that America was "largely built by such families."

Republicans have sought to block Obama's actions on immigration, including a November order lifting the threat of deportation for millions of illegal immigrants.

Senator John Thune, a member of Senate Republican leadership, said there may be differences of opinion with the pope but that lawmakers will try to show him utmost respect.

Thune said that while U.S. lawmakers can learn about mercy, compassion and forgiveness from the pope, "there are also things that we hope he can take away from visiting our country for the first time" such as "recognizing that free enterprise is the greatest anti-poverty force that the world has ever seen."

The pope's criticism of unbridled capitalism has unsettled many U.S. conservatives.

After addressing Congress, Francis is due to speak to a group of 200 people served by the Catholic Charities group. Members of the largely low-income, immigrant group receive medical or mental health care through the Church-sponsored program.

Following that, the pope is set to go to Joint Base Andrews in Maryland to fly to New York, where he will attend evening prayer services at St. Patrick’s Cathedral.