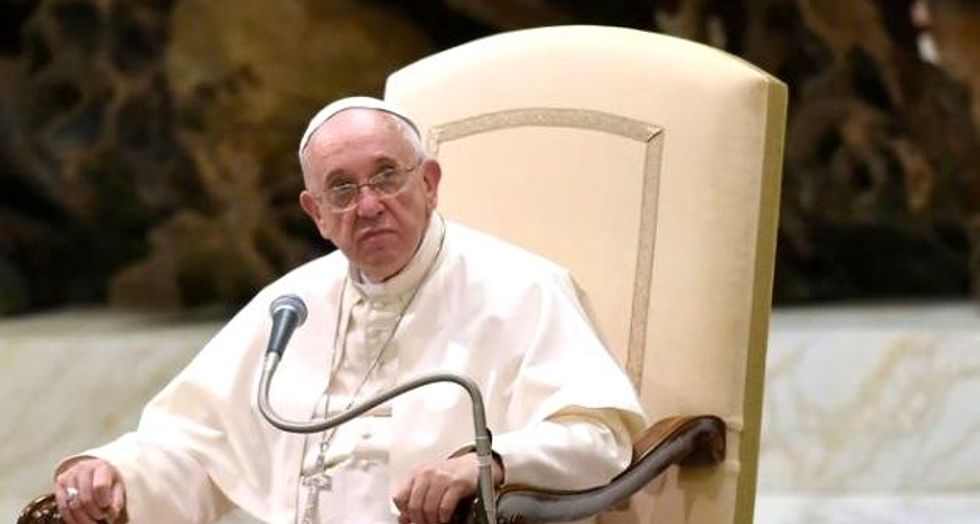 Pope Francis looks on during his weekly audience at the Vatican, on August 12, 2015 (AFP)

Bob Cortes, a Republican legislator in Florida, fears he is losing the Hispanic vote that helped get him elected. The culprits: Republican presidential candidates such as Donald Trump who are railing against immigration.

The upcoming visit by the most socially progressive pope in generations threatens to alienate them even more, driving a further wedge between Cortes' party and the Hispanic voters it needs to win back in order to retake the White House.

More than half of U.S. Latinos are Catholic, and they in turn represent 40 percent of the 51 million Catholics in America, making them a vital constituency for Pope Francis to address on his first U.S. trip that starts next week.

He is expected to address immigration, the closest issue to Hispanics' hearts. Francis has said that migrants and refugees should not be treated as "pawns on the chessboard of humanity."

“I hope the pope, being from a Latin American country, will kind of set the record straight that everyone here who speaks Spanish is not here illegally,” said Cortes, a Florida House representative who was raised in Puerto Rico.

To Cortes and other Latino Republicans, the more Trump talks, the more a political opportunity slips through their party’s fingers. Every month thousands of people fleeing Puerto Rico’s economic crisis settle in central Florida, each one a potential voter in next year’s presidential election.

Polls show that Francis, the first Latin American pope, is overwhelmingly popular among U.S. Hispanics regardless of their political persuasion, suggesting that politicians take a risk in having a message that strays too far from his.

Republicans here argue the Catholic Church remains a fundamentally conservative institution, lining up well with them on traditional issues like abortion and same-sex marriage.

But Francis' calls for action to tackle climate change, his stark criticisms of capitalism and inequality, and his somewhat more liberal stance on social issues risk throwing him into even sharper relief with leading Republicans in Hispanics' minds.

A new Reuters/IPSOS poll shows that on a range of issues ranging from climate change to economic inequality to energy production, Hispanic Catholics are more likely to side with the pope than Catholics as a whole. (http://polling.reuters.com/#!search/pope)

Nelson Araque, a Catholic high-school teacher in Fort Lauderdale, said Francis’ encyclical this year that called for concerted action to combat human-driven climate change has pushed the issue to the top of Hispanic concerns.

“Latinos right now place the importance of Pope Francis’ message on climate change at the same level of immigration and abortion,” said Araque, who is also an environment activist.

Francis, Hispanic Catholics here say, is viewed as someone who sits outside the left-right poles of U.S. politics.

"They don’t see him as a liberal or conservative, but they see him for what he is: a breath of fresh air,” said Jay Rodriguez, chairman of the Hispanic Republican Organization, an advocacy group.

Republicans here say that Francis' visit is a chance to impress on Hispanics that Republican values, particularly on social issues, are in line with the pope's.

Francis recently made it easier for Catholic women around the world to obtain absolution from their local priests for “the sin of abortion” if they are truly contrite. He has also signaled a greater acceptance of homosexuals.

“We need to educate the folks that come here who think they’re Democrats, to understand they are more likely to be Republicans,” said Bertica Cabrera Morris, a prominent Orlando Republican who has worked with Florida Sen. Marco Rubio, another Republican candidate. “I think the Democratic Party has done a better job than we have.”

That has been borne out in recent presidential elections. Mitt Romney garnered less than 30 percent in his race against President Barack Obama in 2012, down from the 44 percent that George W. Bush earned in his 2004 reelection campaign.

Central Florida, evenly divided between Democrats and Republicans, has long been viewed as the key to winning the state, a massive prize with its 29 electoral votes. More than 300,000 Puerto Ricans now call the region home and between 1,000 and 4,000 new residents are estimated to be arriving monthly.

Both Rubio and fellow candidate Jeb Bush are Catholic, and Bush has gone the furthest among Republican contenders in calling for reforms that would include a path to legal status for undocumented immigrants. Neither Bush, whose wife is a Mexican Catholic, nor Rubio embraced Francis’ climate encyclical, though both were careful not to criticize the pope.

Jim Towey, the president of the Catholic Ave Maria University in Naples, Florida, believes Francis' visit will draw a harsh contrast between the Trump-led conservatives in the party and those with a more moderate message.

“I think the pope’s visit is going to crystallize the fact that there are only a couple of Republicans who are going to be able to appeal to Catholic voters,” said Towey, who worked in the last Bush White House and is a supporter of Jeb Bush.