Pope Francis to deliver most speeches in Spanish during US tour 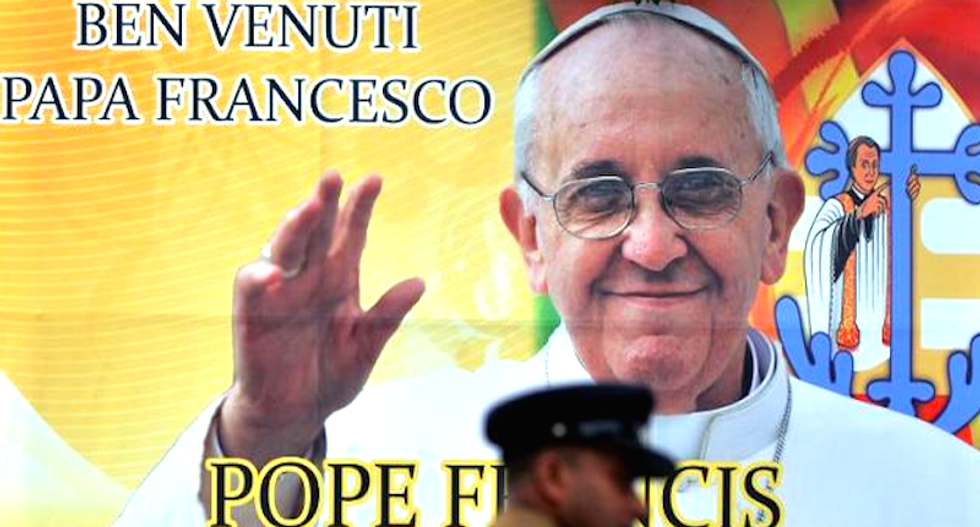 A Sri Lankan policeman stands guard as front of the billboard bearing the image of Pope Francis in Wattala on January 12, 2015 ahead of the pontiff's visit (AFP)

Only four of pontiff’s speeches will be in English, while 14 others, including one at the United Nations, will be in his native language, Vatican says

Related: Americans are ready to hear Pope Francis – but will they listen?

Pope Francis will deliver most of his speeches in his native Spanish when he arrives in the US next week for his three-city tour , with just four speeches expected in English.

Federico Lombardi, the Vatican’s chief spokesman, said on Tuesday that the Argentinian pontiff will deliver 14 speeches in Spanish – including a high profile speech before the United Nations. Lombardi said that the pope finds it easier to communicate in Spanish.

Indeed, if the past offers any clues to his upcoming tour of Cuba and the US, the pope has tended to make some of his most newsworthy comments in Spanish, especially when he departs from prepared remarks and speaks off the cuff.

The papal visit comes amid a caustic debate in the US about immigration and the wide use of the Spanish language.

Donald Trump, the Republican presidential candidate leading the polls, has been critical of foreigners who do not assimilate or learn English. He has also taken aim at Jeb Bush – who often uses Spanish on the campaign trail – saying his rival “should really set the example by speaking English while in the United States”.

Robert Mickens, a veteran Vatican reporter, said that the pope can seem as if he is confined to a “straitjacket” when he speaks in his limited English, and prefers to revert to his native tongue when possible.

While the decision is largely practical, it is also symbolic. One of the major themes of the pope’s three-city tour – with stops in Washington, New York, and Philadelphia – will be immigration. He is expected to touch on the migration crisis in Europe during a speech about the need to protect creation at the UN, but will also likely discuss the US’s history of welcoming immigrants – and its treatment of immigrants today, particularly Latinos.

The Vatican on Tuesday said the pope had been doing his homework ahead of his visit to Cuba and the US, saying that the pontiff knew “that it’s very important”.

It confirmed that it was “plausible” that Pope Francis would be meeting with Fidel Castro, the ailing revolutionary leader, when he is in Havana, and also said – in response to one reporter’s question – that it was possible that the pope would be meeting with US victims of clerical sex abuse . Such meetings, Lombardi said, are not usually announced in advance, but he added that details about any meeting would promptly be publicized if it did occur.

While the pope is seen as a reformer – having just announced a significant revamping of rules involving marriage annulments – experts say that Francis has still not fully made his mark on the church’s legacy of sex abuse, particularly in the US, where the scale of such abuse was first exposed.

The Vatican refrained from offering any fresh details about the subjects of Francis’s speeches, but observers have speculated thattopics including the US prison in Guantanamo Bay, Cuba, and gun and drug-related violence and incarcerations may also be featured in his comments.

The Vatican also said the pope would not be meeting with Russian president Vladimir Putin at the United Nations, saying comments by a church official at an earlier press conference that suggested the two would meet had been misconstrued.

Lombardi also said he had no information that a meeting between Francis and Chinese President Xi Jinping was being considered.

The two leaders will both be in Washington and New York at roughly the same time, leading some pundits to consider the possibility that a surprise meeting might be in the works – a development that would be shocking given the fact that the parties do not have formal relations. While it appeared highly unlikely, Pope Francis remains a man of surprises.