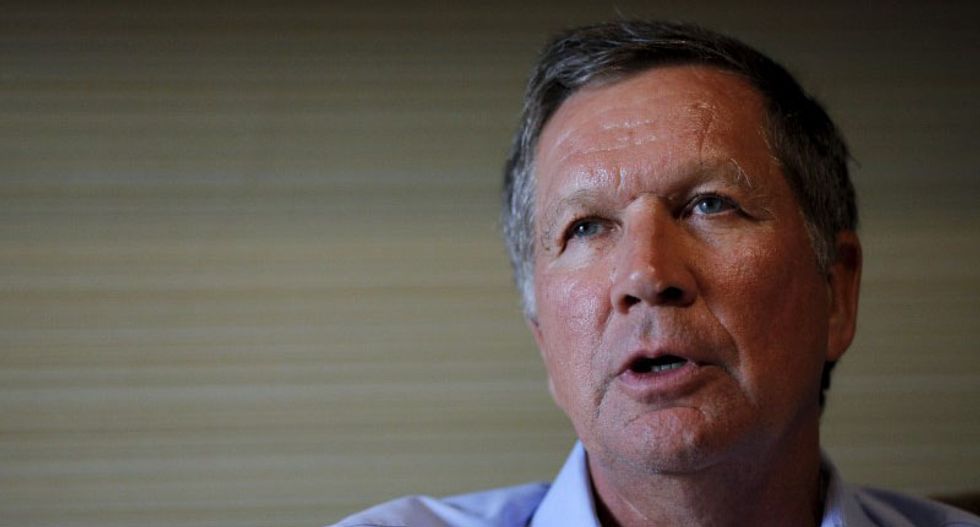 With front-runner Donald Trump seen as too much of a wild card and Jeb Bush faltering in opinion polls, establishment Republicans are gravitating toward John Kasich, the Ohio governor who vows to shake up their demographically challenged party if he wins its nomination for U.S. president.

If history can be a guide, Kasich (pronounced KAY-sik) may best fit the mold of Arizona Senator John McCain, a self-described maverick who won the party's nomination in 2008 only to lose the election to Democrat Barack Obama.

For his part, McCain parted from Republican Party orthodoxy on the hot-button issue of immigration. He ran strong in the early nominating contest in New Hampshire. Kasich’s top strategist, John Weaver, is a veteran of McCain's team.

“I have never been the choice of the Republican establishment,” Kasich, 63, said in a Reuters interview on Tuesday. He vows to appeal to minorities and the poor, groups that steer clear of the party according to opinion polls.

Although hardly a household name, Kasich is one of the most experienced politicians among the 17 Republican hopefuls. He has 18 years of legislative experience in Congress and now is serving a second term as governor of the seventh largest state.

At age 26, he won election to the Ohio Senate.

New Hampshire, which on Feb. 9 becomes the second state to hold a nominating contest (after Iowa), is crucial to Kasich, who needs momentum to draw more media attention and fundraising dollars as the campaign moves into other states.

Kasich is competing for the same bloc of voters and donors nationally as the quintessential candidate of the establishment, former Florida governor Bush, the kin of two American presidents.

Though Kasich lags in national polling - 2 percent in the most recent Reuters/Ipsos tracking poll to 38 percent for real-estate mogul and reality-TV star Trump - he is beginning to draw national attention for his surging New Hampshire numbers.

An NBC/Marist opinion poll released over the weekend showed him running in second place with 12 percent to Trump's 28 percent. Retired neurosurgeon Ben Carson had 11 percent and Bush placed fourth with 8 percent.

While not always staking out establishment positions, Kasich is racking up endorsements from prominent New Hampshire Republicans such as Doug and Stella Scamman, longtime activists, and Tom Rath, the state's former attorney general.

Those who back him view his experience and his pledge to widen the party’s appeal to Hispanic and low-income voters as strengths that could help Republicans better compete in the November 2016 presidential election against Hillary Clinton, the Democratic front-runner.

Even when pressed by reporters, however, Kasich refuses to call out his rivals by name. Instead his eyes are fixed on what he says is his biggest problem: voters' unfamiliarity with him.

Asked at a national security forum in New Hampshire his view of other Republicans' promises to tear up the nuclear accord with Iran on their first day as president, Kasich paused. He said he would not name a single rival because reporters in the room would highlight his comment as an attack.

PULLING UP A CHAIR TO CHAT

Like McCain, Kasich shows a willingness to be accessible, sitting for scores of national interviews and, during his lunch break at Concord's Barley House, pulling up a chair to chat with a quartet of reporters.

As governor Kasich accepted federal dollars to expand Medicaid, a joint federal and state program to help low-income Americans cover medical costs. While his stance may be anathema to the far right, he embraces it as the right thing to do for the poor.

He walks a fine line on social issues: He accepts laws on same-sex marriage as final but talks on the campaign trail about the importance of faith along the campaign trail. He supports a pathway to legal status in the United States for undocumented immigrants but wants to build a fence on the southern border with Mexico.

“When I ran for governor I just kicked the door down, and the establishment was disorganized and they couldn’t stop me,” he said when asked about his political career.

Extending the metaphor, Kasich said: “Most of my career I’ve been trying to knock down the walls to get in the city. Now I’m in the city, and that kind of troubled me for a while till I figured out that I could still be a reformer even though I’m running the city.”