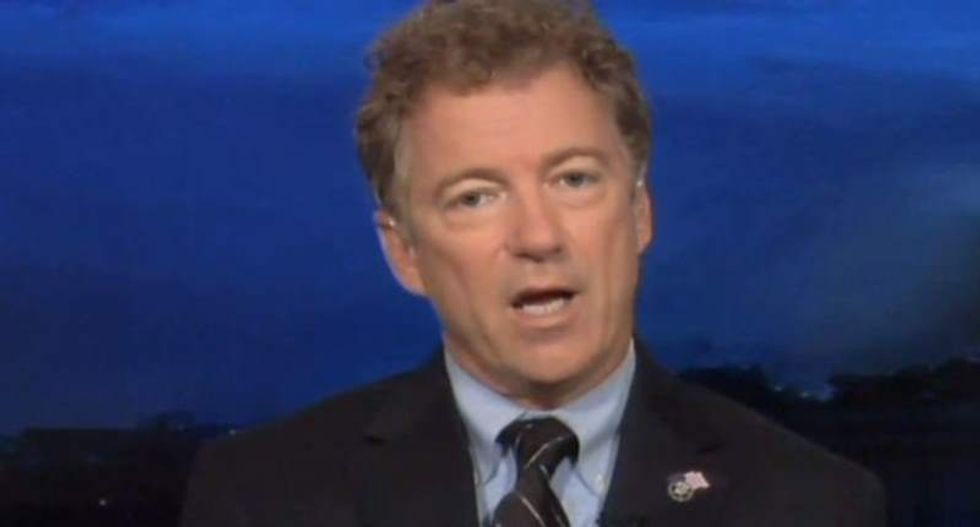 Sen. Rand Paul (R-KY) expressed concern over antigay Kentucky clerk Kim Davis' incarceration on Thursday, saying that the legalization of same-sex marriage threatened to make a "martyr" out of her.

"A lot of people have talked about this for years -- why not just privatize marriage?" he asked guest host Tucker Carlson. "Have it in the churches, and people will just go to definition they agree with. But people won't be forced to acknowledge a definition they don't agree with."

Paul's remarks came after Davis was found in contempt of court and put in jail for refusing to issue licenses to same-sex couples despite being rebuked by both a federal court and the Supreme Court. Davis has argued that she would be breaking "God's law" by doing so, which has earned her support from some of Paul's fellow Republican presidential candidates.

"Couldn't someone have found another way?" Carlson asked. "Hire another clerk, maybe fire this clerk. But jail? That does seem really over the top, no?"

Neither Carlson nor Paul mentioned the fact that, because Davis was elected to her position, state lawmakers would have to impeach her. Gov. Steve Bashear (D) will not convene a special session of the General Assembly to propose legislation allowing state officials to issue marriage licenses to same-sex couples.

Instead, Paul -- who waffled on the Civil Rights Act in 2010, citing concerns over effects on private businesses -- seemed to offer praise for clerks in Alabama who refused to issue any marriage licenses at all because of the high court's ruling on marriage equality.

The senator did not mention, however, that the resistance by Alabama officials could cost taxpayers there $200,000 in legal fees for the futile effort.

"The thing is that, if you want to persuade people of a new definition of marriage, I think handcuffing people and putting them in jail and making a martyr of someone is probably not a good way to persuade people," Paul said.