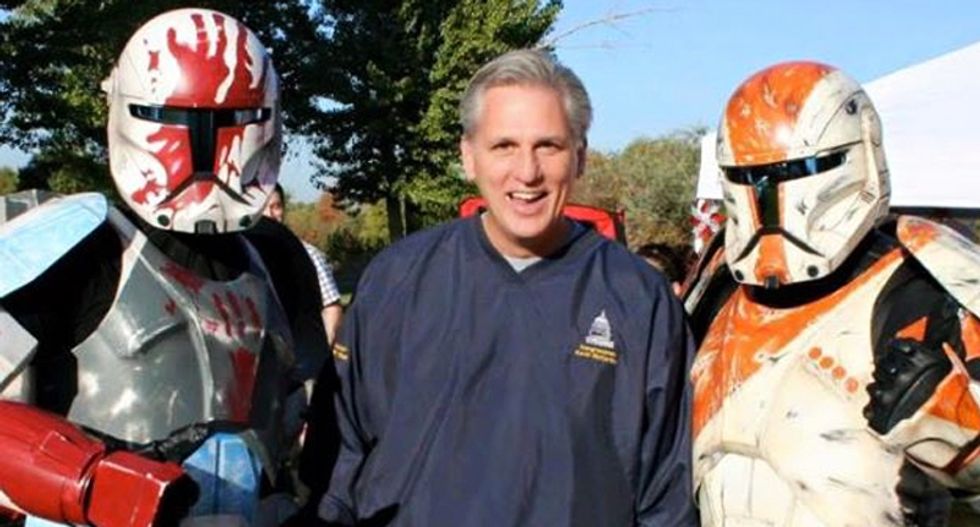 With the surprise announcement by Republican House Speaker John Boehner that he is stepping down, speculation immediately turned to who will be his replacement before his seat at the Republican leadership table even had a chance to grow cold.

Conservatives have attempted to depose Boehner several times over the years and he has become the whipping boy for every move President Obama has made. Boehner is disliked by the base so much that the announcement of his departure at Friday's Value Voter's summit was greeted with raucous cheers.

Next in line for the unenviable position of wrangling the various conservative factions is House Majority Leader Kevin McCarthy, who represents Bakersfield located in the heart of the deep blue state of California and that possibility is sure to give conservative hardliners fits.

Likely to be a flashpoint is McCarthy's pro-amnesty stance, no doubt influenced by the fact that his district is over 30 percent Hispanic.

Following former Congressman Eric Cantor's equally surprising exit from Congress -- after being primaried out by a Tea Party favorite -- McCarthy moved up the Republican food chain, much to the chagrin of hardliners who saw him as a Boehner/Cantor clone more interested in legislation than throwing red meat to the masses.

In a post on Red State, conservative gadfly Erick Erickson attempted to shoot down McCarthy's ascension, saying it would continue the "bad blood" between the hardcore conservative wing and the moderates.

"McCarthy is not very conservative and, for all of Cantor’s faults, lacks Cantor’s intelligence on a number of issues. Lest we forget, McCarthy had several high profile screw ups as Whip and has not really seemed to ever improve over time," Erickson wrote." If House Republicans wish to not find common ground with the conservatives who make up their base, McCarthy is a fine pick. But if they want to get everyone together as we head into November and then into 2016, they should consider someone else. McCarthy is a non-starter for conservatives and the bad blood will continue."

Radio host Mark Levin left no doubt had he felt about McCarthy, calling him "dimwitted."