Russia and Iran throw weight behind Assad at UN meet 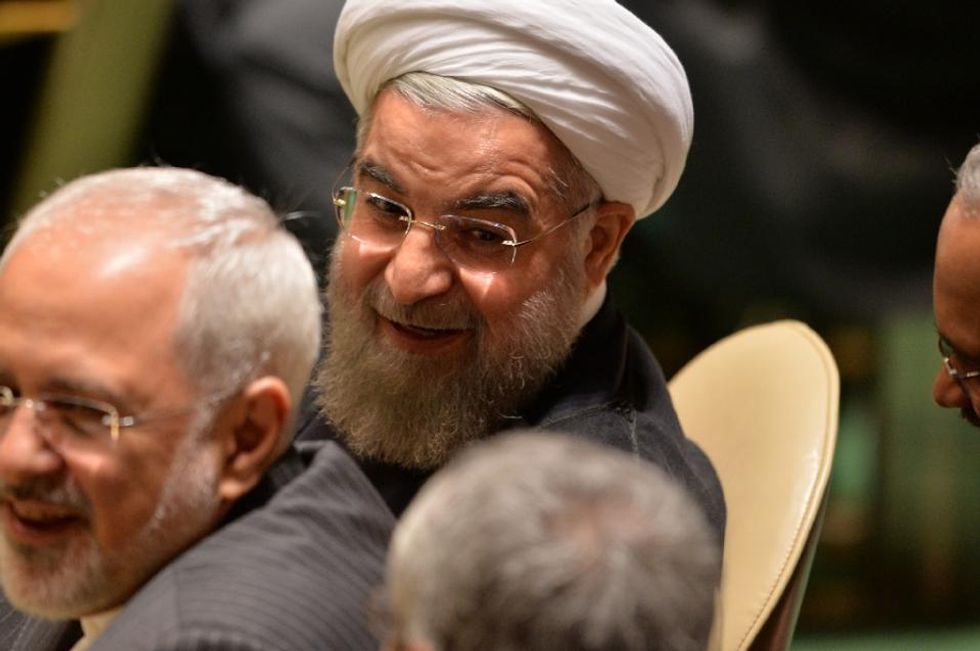 Russia and Iran announced a new coalition to defend Syrian strongman Bashar al-Assad and defeat the Islamic State on Sunday, handing him a dramatic victory ahead of the UN General Assembly.

Assad was not among the dozens of leaders gathered in New York for the annual UN meeting, but will have been heartened by his allies' demand that the world focus on defeating the jihadist threat.

"I think today everyone has accepted that President Assad must remain so that we can combat the terrorists," Iran's President Hassan Rouhani said, in an interview with CNN.

That may be overstating the case: The United States and its allies continue to hold Assad responsible for a civil war that has left 240,000 Syrians dead and created the conditions for extremism to thrive.

But, on the day that France began bombing IS targets inside Syria, momentum appeared to be building behind the idea of leaving Assad in place while a political solution to the conflict is sought.

Britain's Prime Minister David Cameron echoed Washington's line that Assad "can't be part of Syria's future" but British media reported he will use his UN address to abandon a demand that he step down before talks begin.

"Obviously conversations about how we bring about transition are very important and that's what we need to see greater emphasis on," he told reporters.

US Secretary of State John Kerry expressed concern in a meeting with his Russian counterpart Sergei Lavrov that Russian backing would embolden Assad to cling on to power and thwart any hopes for peace.

But Moscow's support is not merely rhetorical and diplomatic.

Lavrov confirmed an announcement by Iraq that Russian, Syrian, Iraqi and Iranian officers have formed a joint intelligence cell in Baghdad to share information and plans to combat the Islamic State group.

And, in an interview with CBS News broadcast one day before he addresses the United Nations himself, President Vladimir Putin urged other nations to join a Russian-led war on the jihadists.

"We have proposed to cooperate with the countries in the region. We are trying to establish some kind of coordinated framework," he said

"We would welcome a common platform for collective action against the terrorists," he added, dubbing Assad's forces the "one legitimate conventional army" in Syria.

Russia appeared to have caught US diplomats flat-footed, and Kerry went into his talks with Lavrov expressing concern that Russian moves had not been coordinated with the existing US-led anti-IS coalition.

"I think the critical thing is that all of the efforts need to be coordinated. This is not yet coordinated," Kerry said. "I think we have concerns about how we are going to go forward."

This sets the stage for a titanic diplomatic showdown on Monday between Putin and Obama, who will meet each other privately but also make rival set-piece speeches before the General Assembly.

Putin is expected to use his speech to blame instability in the Middle East on Western military intervention and to demand that future missions be coordinated and approved though the United Nations.

Washington and its allies blame Assad for the mayhem in Syria but have refused to put boots on the ground, despite the chaos after four years of intense bloodshed. Meanwhile Russia ramped up its presence.

Moscow already has a powerful military detachment on a Syrian airbase in government-held territory, equipped with warplanes and tanks, and will now work more closely with neighboring Iraq.

And the Russian leader said he had personally called leading members of the US-led coalition -- including Turkey's President Recep Erdogan and Saudi Arabia's King Salman to explain to them his vision for an alliance.

Russia and Iran have both armed the Syrian regime, and Rouhani echoed Putin's position.

"In Syria, when our first objective is to drive out terrorists and combat terrorists to defeat them, we have no solution other than to strengthen the central authority and the central government," he told CNN.

In his CBS interview, Putin stressed the need to work with Assad to defeat the jihadist threat and mocked the United States' troubled $500-million effort to train "moderate" Syrian anti-IS fighters.