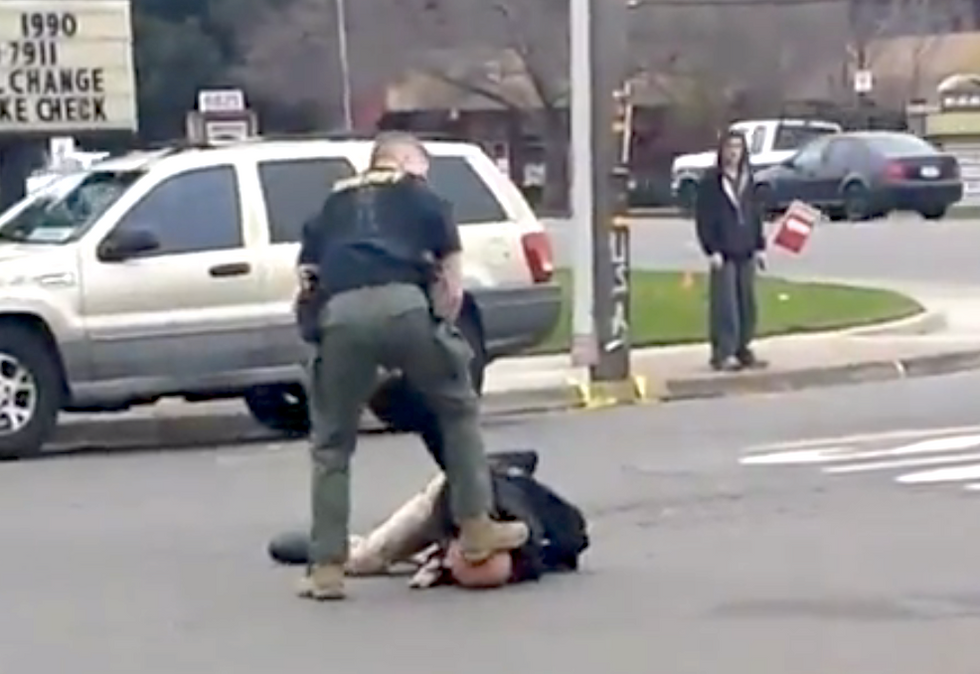 According to the Sacramento Bee, this is the third lawsuit that Pfeifer has faced since 2009 in which he is accused of brutally beating suspects with his duty-issue flashlight.

Reyes alleges that in December of 2009, Pfeifer "tasered, pepper-sprayed and beat plaintiff in the middle of the street, in broad daylight, with his department-issued flashlight. The wrongful attack was witnessed by many citizens who were appalled by the conduct, some of whom recorded the deputy’s illegal conduct.”

The beating left Reyes with a "broken nose, broken ribs, a concussion and a large gash above his left eye."

Reyes and Pfeifer got into an argument when Reyes -- who had a lengthy history of run-ins with local police and sheriff's deputies -- asked Pfeifer to move his police cruiser, which was blocking he sidewalk.

Reyes said that he asked politely twice, then became angry with Pfeifer and the dispute quickly escalated.

The Bee said, "Pfeifer then got out of his car and used his pepper spray, Taser and flashlight as the scene was captured on video, according to the lawsuit."

Reyes was arrested on charges of resisting arrest, although eventually the charges were dropped by the Sacramento County District Attorney.

Another case of excessive violence involving Pfeifer was the arrest of Mickey Donohue on Sep. 14, 2014. Donohue was apprehended while fleeing from police in a stolen vehicle.

When he came to a stop, Pfeifer was the first to the vehicle, where he began clubbing Donohue with the flashlight. Donohue's injuries left him with a $12,989 hospital bill. His case is currently pending.

Currently Pfeifer is on detective duty, although the sheriff's office declined to say whether the 14-year veteran of the department had been reassigned due to his violent conduct.

Prior to both of those incidents, Pfeifer was one of four deputies charged in an excessive force complaint filed by a 25-year-old woman who was hit, dragged, punched and pepper-sprayed when the deputies arrived to break up a party.

“He basically threw me on the ground,” said Solomia Treshchuk. “They hogtied me, they pepper-sprayed me and hit me.”

The attention of Pfeifer is coming at a time when police officers are facing increased scrutiny for their violent behavior in arresting civilians who do not pose a threat to them. The Black Lives Matter movement has made reining in police violence a key platform of its anti-racism message.