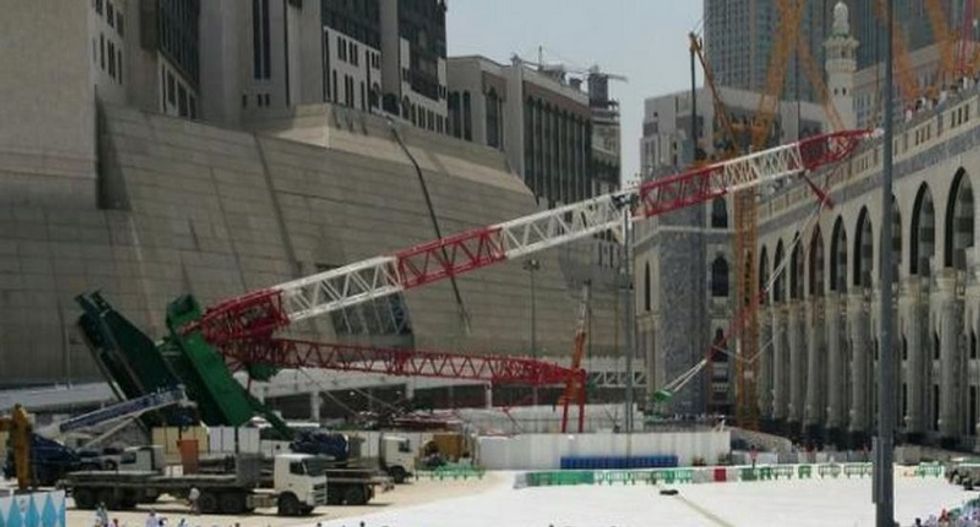 AFP/AFP - Muslim pilgrims walk past a crane that collapsed the day before at the Grand Mosque in Saudi Arabia's holy Muslim city of Mecca, September 12, 2015

Saudi Arabia's King Salman vowed on Saturday to find out what caused a crane collapse that killed 107 people at Mecca's Grand Mosque ahead of the annual hajj pilgrimage.

The hajj, a pillar of the Muslim religion which last year drew about two million faithful, will take place despite Friday's tragedy, Saudi authorities said as crowds returned to pray a day after the incident.

Hundreds of thousands of pilgrims had already arrived in Mecca when the massive red and white crane toppled over during a Friday thunderstorm.

"We will investigate all the reasons and afterwards declare the results to the citizens," Salman said after visiting the site, one of Islam's holiest.

Parts of the Grand Mosque remained sealed off on Saturday around the wreckage of the crane, which also injured around 200 people when it crashed into a courtyard.

But there was little mourning among pilgrims, who snapped pictures of the collapsed metal and continued with their prayers and rituals.

"I wish I had died in the accident, as it happened at a holy hour and in a holy place," Egyptian pilgrim Mohammed Ibrahim told AFP.

Om Salma, a Moroccan pilgrim, said "our phones have not stopped ringing since yesterday with relatives calling to check on us".

Indonesians and Indians were among those killed when the crane collapsed, while the injured included Malaysians, Egyptians, Iranians, Turks, Afghans and Pakistanis.

Salman expressed his condolences to the families of the dead, and then visited a local hospital "to check on the health of the injured", the official Saudi Press Agency said.

"Suddenly, I heard thunder and then we heard a very loud noise. That was the sound of the crane falling," Mohammed, a Moroccan pilgrim, told AFP.

Another visitor caught up in the tragedy, Ahmed from Egypt, said he and those around him were "very scared, hysterical even".

A Saudi official said the hajj, expected to start on September 21, would go ahead despite the tragedy.

"It definitely will not affect the hajj this season, and the affected part will probably be fixed in a few days," said the official, who declined to be named.

The pilgrimage is a must for all able-bodied Muslims who can afford it.

An investigative committee has "immediately and urgently" begun searching for the cause of the collapse, SPA reported.

The contractor, engaged in a major expansion of the mosque, has been directed to ensure the safety of all other cranes at the site, it added.

For years, work has been under way on a 400,000-square-metre (4.3-million-square-feet) enlargement of the Grand Mosque to allow it to accommodate up to 2.2 million people at once.

"We saw people dying before our eyes", the Arab News quoted Sheikh Abdul Raheem, a witness, as saying.

Pictures of the incident on Twitter showed bloodied bodies strewn across the courtyard, where part of the crane had landed atop an ornate, arched and colonnaded section of the complex.

Irfan al-Alawi, co-founder of the Mecca-based Islamic Heritage Research Foundation, suggested that the authorities had been negligent by having a series of cranes overlooking the mosque.

Alawi is an outspoken critic of redevelopment at the Muslim holy sites, which he says is wiping away tangible links to the

But an engineer for the Saudi Binladin Group, the developer, told AFP the crane had been installed in "an extremely professional way" and that there had been no technical problem.

"We need to accept what happened," he said, at the same time calling for a thorough investigation.

Condolences came in from around the world, including from Arab leaders, as well as from Britain, Canada, India and Nigeria.

It was not the first tragedy to strike Mecca pilgrims, although the hajj has been practically incident-free in recent years.

In 2006, several hundred people died in a stampede during the Stoning of the Devil ritual in nearby Mina, following a similar incident two years earlier.