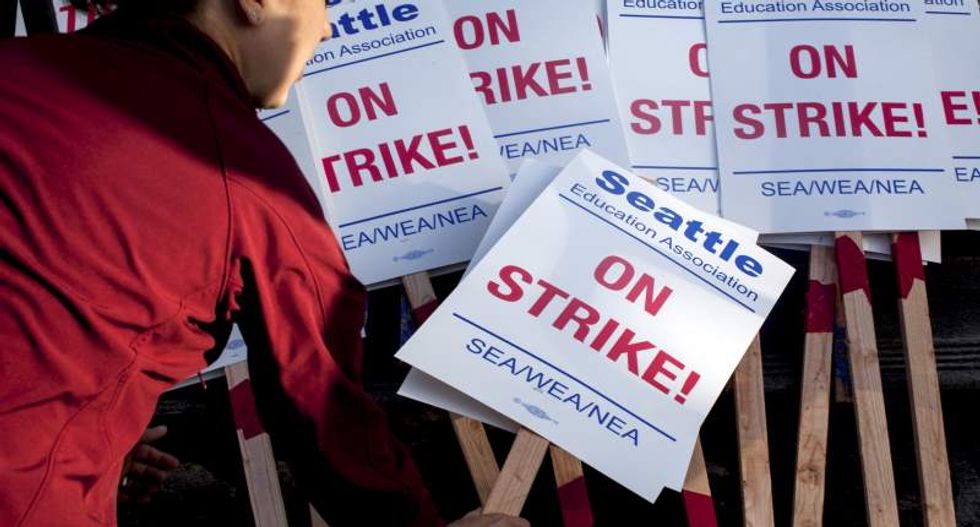 A teacher grabs a sign before walking the picket line as teachers strike outside Roosevelt High School in Seattle, Washington on Sept. 9, 2015. Photo by Matt Mills McKnight for Reuters.

A strike by Seattle's public school teachers stretched through a second day on Thursday, further delaying the start of fall classes for some 53,000 students after contract talks collapsed in disagreements over wages, hours and performance evaluations.

Union and school district leaders met separately with mediators through Thursday, though direct negotiations have not officially resumed, and all of Seattle's nearly 100 schools were due to remain closed on Friday, district spokeswoman Stacy Howard said.

The strike by the 5,000-member Seattle Education Association marked the first contract-related disruption of classes in three decades for the largest school system in the Pacific Northwest.

Launched on what was supposed to have been the first day of classes, the strike provided an extended summer vacation for students and forced many working parents to improvise childcare on short notice.

The teachers' main grievance is that their salaries have not kept pace with surging living costs, particularly for housing, fueled by growth in a high-tech sector that has replaced manufacturing and maritime trades as the chief economic engine of the predominantly liberal city.

Seattle teachers and support staff walked off the job and onto picket lines on Wednesday morning following a breakdown in 11th-hour talks with the school district the night before.

"This has to do with putting more support into the schools when so much money has been going to consultants and managers," said striking English teacher David Grosskopf, 44.

The walkout came at a time of increased scrutiny of education spending in the state. The Washington state Supreme Court last month fined the state $100,000 for every day it failed to present a court-ordered plan for fully funding public schools..

The union encouraged its members to perform some kind of community service rather than walk picket lines on Friday, union spokesman Rich Wood said. The two sides remained at loggerheads over such issues as pay, performance and class size, according to Wood.

The district has offered the union $62 million in wage hikes, staff increases for special education and 30 minutes of added instructional time after two years, according to Howard, the school district spokeswoman. Howard said the union was demanding $172 million in increased wages and benefits.

The union also said the district was insisting on extending the school day by 30 minutes without paying teachers and staff for added time and that teachers had gone six years without a cost-of-living raise.

"Last year, I tried to buy a house in Seattle, not even in the neighborhood I teach, just anywhere in Seattle, and that was a laughable experience," said history teacher Kara Macdonald, 35. "I ended up with a bottom floor, 600-square-foot (56-square-meter) condo."

(Reporting by Bryan Cohen; Writing and additional by Eric M. Johnson in Chicago; Editing by Steve Gorman and Will Dunham)