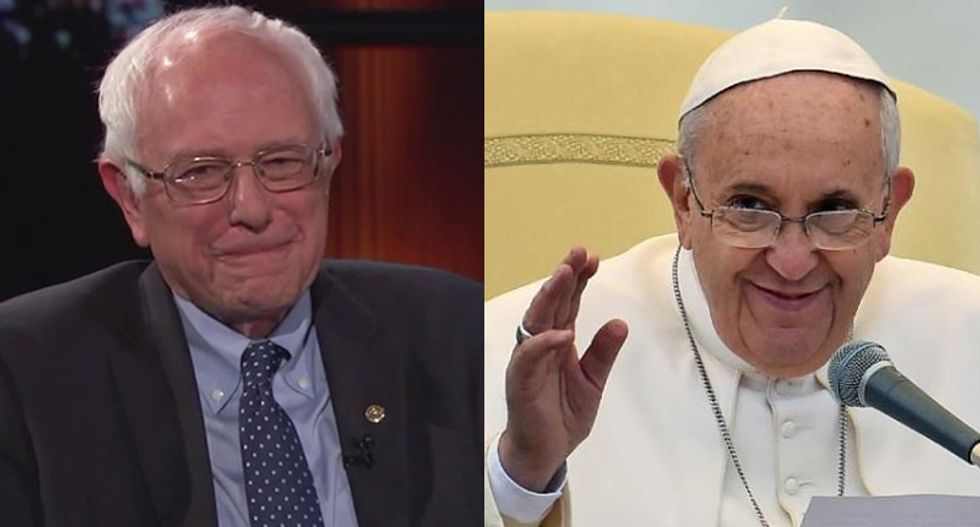 Democratic presidential candidate and Vermont Sen. Bernie Sanders will be marching with striking Washington, D.C. contract workers when Pope Francis arrives in the capital on Tuesday.

According to Politico, the striking workers are demanding an increase in D.C.'s minimum wage to $15 an hour. The coalition Good Jobs Nation arranged the action, which began at 9:30 Tuesday morning.

Sanders tweeted on Tuesday that Americans should honor the pontiff's message of economic justice and heed his warnings about the evils of unfettered capitalism.

Today, as we welcome Pope Francis to the US, I hope that Congress will heed his call for social and economic justice. #PopeInDC
— Bernie Sanders (@Bernie Sanders)1442927704.0

ABC News did a round-up of "10 Times Bernie Sanders and Pope Francis Sounded Alike," a list that included remarks on economic justice:

Pope Francis: “We must say, ‘We want a just system! A system that enables everyone to get on.’ We must say: ‘We don’t want this globalized economic system which does us so much harm!’” (Sept. 22, 2013)

Bernie Sanders: “The American people are saying, "Enough is enough. We need to create an economy that works for all of us and not just a handful of billionaires.” (Cochran, New Hampshire on ABC News’ ‘This Week,’ June 28, 2015)

Pope Francis: “A just wage enables them to have adequate access to all the other goods, which are destined for our common use.” (Nov. 24, 2013)

Bernie Sanders: “The federal minimum wage, it's a starvation wage. You do the arithmetic. People can’t live on it. We have got to raise the minimum wage over a period of years to a living wage.” (Johnston, Iowa, Sept. 3, 2015)

Pope Francis: “We want in our society, torn apart by divisions and conflict, that peace break out! War never again! Never again war! Peace is a precious gift, which must be promoted and protected.” (Sept. 1, 2013)

Bernie Sanders: “It is my firm belief that the test of a great nation with the most powerful military on earth is not how many wars it can engage in, but how it can use our strength and our capabilities to resolve international conflicts in a peaceful way.” (Washington, D.C., Sept. 9, 2015)

And on climate change, among other topics:

Pope Francis: “The vocation of being a ‘protector,’ however, is not just something involving us Christians alone; it also has a prior dimension which is simply human, involving everyone. It means protecting all creation, the beauty of the created world… It means respecting each of God’s creatures and respecting the environment in which we live." (March 19, 2013)

Bernie Sanders: "When we talk about our responsibilities as human beings and as parents, there is nothing more important than leaving our planet healthy and inhabitable for our kids and our grandkids." (Los Angeles, Aug. 10, 2015)

Pope Francis: “While the earnings of a minority are growing exponentially, so too is the gap separating the majority from the prosperity enjoyed by those happy few.” (Nov. 24, 2013)

Bernie Sanders: "There is something profoundly wrong when we are seeing a proliferation of billionaires at the same time as millions of Americans are working longer hours for lower wages and we have the highest rate of childhood poverty of any major country." (Portland, Maine, July 6, 2015)