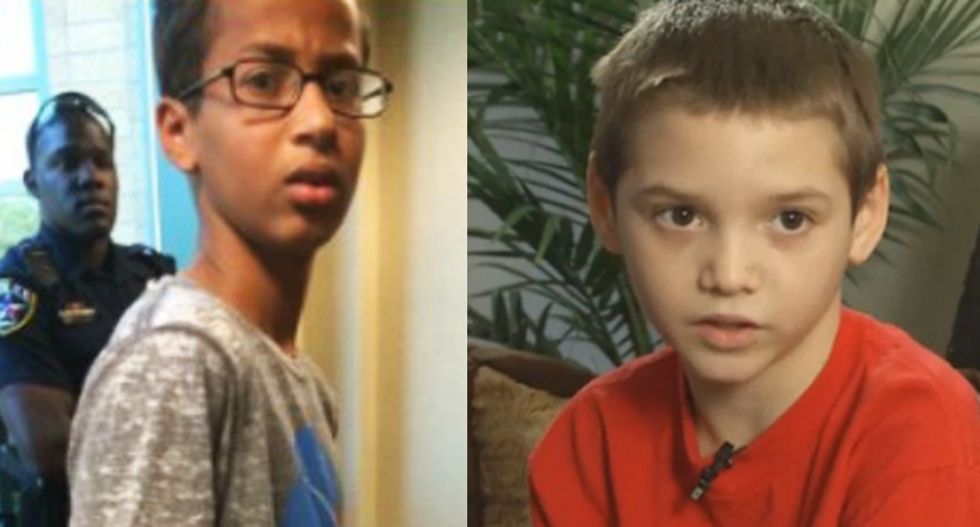 In an impressive one-two punch -- showing undying fealty to the NRA while at the same time expressing their bilious acid-eating-at-their-stomach-lining rage that Muslims are allowed to roam the Earth -- conservatives are comparing the handcuffing and arrest of Ahmed Mohamed to a kid who was sent home from 2nd grade for gnawing his Pop Tart into the shape of a gun two years ago.

Yup. Upon this single straw floating in all of the water of world, this will keep their belief afloat that all Muslims are secret terrorists who want to destroy mankind and white people can't catch a break.

For the sake of perspective, let us briefly revisit the two incidents where Ahmed Mohamed showed a genuine enthusiasm for learning and impressing his teachers, and the parents of Josh Welch -- aka the "Pop Tart kid" -- decided to give him a nudge towards childhood obesity by giving him Pop Tarts in his lunch.

Oh, shut up. Pop Tarts are awful except for the frosted strawberry ones which are awesome when you don't want to drive -- not walk because that defeats the whole purpose of snack foods -- to the mini-mart for little chocolate donuts.

Ahmed Mohamed is a 14-year-old brown-skinned Muslim kid who lives in the heart of no-longer-Jade-Helm occupied Texas. Based upon that alone you know this story is not going to go well. Mohamed, in an effort to impress his teachers at his new school, brought in a digital clock he put together out of parts. Cue freakout with Muslim kid carrying device that includes wires (pro-tip: cut the red one, that always works in the movies) that teachers took to be a bomb when he told them" Hey, look at the clock I made" which is Muslim for "Allahu akbar ... tick tick tick --BOOM!" Police are called in. Bomb squad is dispatched. Kid tells cops it's a "clock." Cops hear word that sounds like "bomb" but with one extra letter. Cops figure out it really is a clock. Arrest kid anyway. Perp walk in front of new classmates. Sharia law averted. U-S-A! U-S-A! U-S-A!

Pop Tart kid, 7-year-old Josh Welch, chews his Pop Tart into the shape of a gun. Goes "p-chew, p-chew" at some classmates, gets sent to the office and is turned over to his parents and has to stay home for two days -- which is just like Guantanamo Bay except you get to watch SpongeBob.

Now that pictures have been released by authorities of Mohamed's not-bomb, Internet sleuth's are saying "It sure looks like a bomb to me what with them there wires and electronic doo-hickeys and thingamabobs and shit. Someone get me a Pop Tart while I make  a YouTube video."

These Internet sleuths include Bristol Palin who seems to know more about explosive devices than about how babies are made.

But that is not enough. There has to be a white person somewhere who was treated even worse than Mohamed.

Enter the Pop Tart kid into the Arena of White Grievances.

Over at the Independent Women's Forum -- which seems to have created this line of thought independent of proportion and common sense -- the real victim here is Pop Tart kid.

So--two cases of silly school officials enforcing an even sillier "zero tolerance" policy regarding any object that looks conceivably like a weapon. It was wrong to arrest Ahmed over a science project, and just as wrong to punish a second-grader over a pastry.

But there's a difference: the difference between the names "Ahmed Mohamed" and "Josh Welch." Also the difference between Maryland, a liberal, Democratic-leaning state and Texas, a conservative, Republican-leaning state. Ahmed's arrest delivered an outrage two-fer to the bien-pensants of the political establishment and the media: a chance to scream "Islamophobia!" plus tut-tut the backward rubes of the Lone Star State.

Speaking for the bien-pensants, we didn't need to Ahmed Mohamed to be treated like a terrorist to "tut-tut the backward rubes of the Lone Star State." Outside of the  understandable loathing of Florida -- literally crawling with dreaded "Florida man" -- everything makes Texas the most unlikable state. Except for Austin. Hang in there guys, we'll airlift you out soon.

Beyond that, pretty much everyone thought kicking Pop Tart kid out of school was stupid and an overreach except for the local school authorities who were incapable of saying "We fucked up" -- probably because of the swearing.

In Texas the school and police morons couldn't come to Mohamed and say the same thing because nobody wants to shuffle their feet and look away and say, "Yeah, we're kind of racist and we were  awful to you because we thought you had a bomb when you didn't -- but in our defense it's kind of an American thing.  So, sorry. Here have a Pop Tart. No, I don't know if they're 'halal.' Is that a terrorist term? Sorry. Sorry. Reflex, doncha'know."