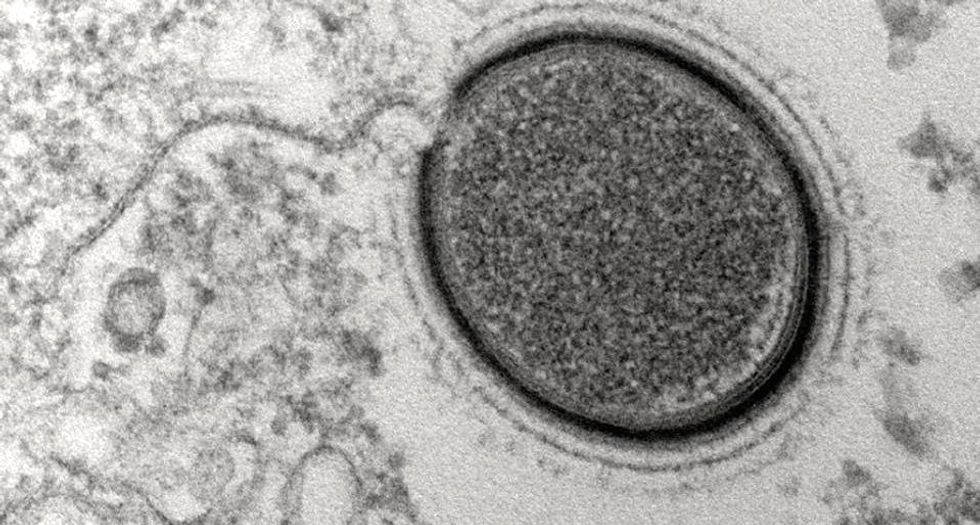 Cells of the Mollivirus sibericum, a virus that was buried deep in the Siberian permafrost for over 30,000 years, is thought to be the newest representative of what are loosely known as "giant viruses" (AFP Photo/Igs/Cnrs/Amu)

Scientists said they will reanimate a 30,000-year-old giant virus unearthed in the frozen wastelands of Siberia, and warned climate change may awaken dangerous microscopic pathogens.

Reporting this week in the flagship journal of the US National Academy of Sciences, French researchers announced the discovery of Mollivirus sibericum, the fourth type of pre-historic virus found since 2003 -- and the second by this team.

Before waking it up, researchers will have to verify that the bug cannot cause animal or human disease.

Mollivirus sibericum -- "soft virus from Siberia" -- comes in at 0.6 microns, and was found in the permafrost of northeastern Russia.

Climate change is warming the Arctic and sub-Arctic regions at more than twice the global average, which means that permafrost is not so permanent any more.

The regions in which these giant microbes have been found are coveted for their mineral resources, especially oil, and will become increasingly accessible for industrial exploitation as more of the ice melts away.

"If we are not careful, and we industrialise these areas without putting safeguards in place, we run the risk of one day waking up viruses such as small pox that we thought were eradicated," he added.

In safe laboratory conditions, Claverie and colleagues will attempt to revive the newly discovered virus by placing it with single-cell amoeba, which will serve as its host.

Claverie, who runs a lab at France's National Centre for Scientific Research (CNRS), and a team discovered another giant virus, which they called Pithovirus sibericum, at the same location in 2013, then managed to revive it in a petri dish.

In 2004, US at a top-security lab at the Centers for Disease Control and Prevention (CDC) resurrecte …

Unlike most viruses circulating today, and to the general astonishment of scientists, these ancient specimens dating from the last Ice Age are not only bigger, but far more complex genetically.

M. sibericum has more than 500 genes, while another family of giant virus discovered in 2003, Pandoravirus, has 2,500. The Influenza A virus, by contrast, has eight genes.

In 2004, US scientists resurrected the notorious "Spanish flu" virus, which killed tens of millions of people, in order to understand how the pathogen was extraordinarily so virulent.

US researchers flew to Alaska to take frozen lung tissues from a woman who was buried in permafrost.

By teasing genetic scraps out of these precious samples and from autopsy tissues stored in formalin, the team painstakingly reconstructed the code for the virus' eight genes.

The work was done in a top-security lab at the US Centers for Disease Control and Prevention (CDC).