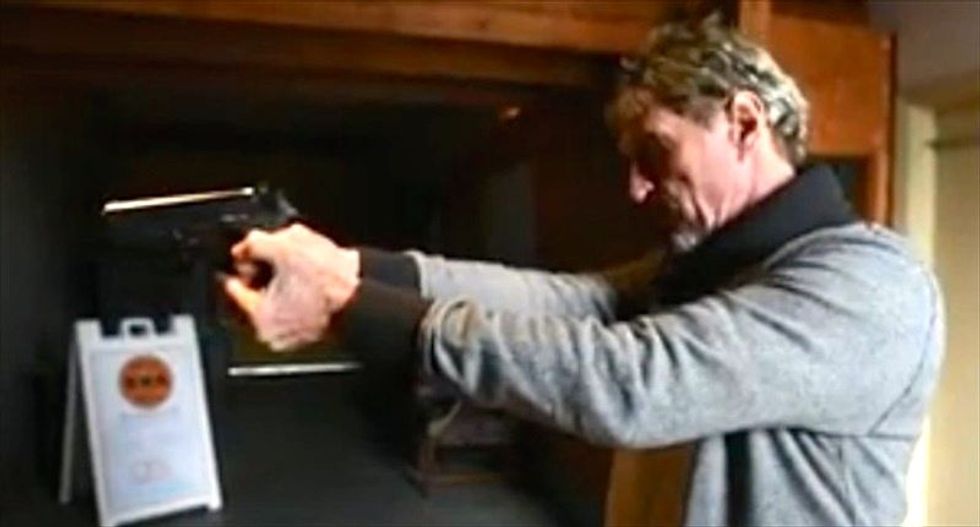 He does not like Washington, does not plan to travel the country kissing babies or shaking hands and does not want to debate anybody because that is "nonsense," but John McAfee says he is running for president.

The offbeat anti-virus software industry pioneer who grabbed media headlines in 2012 during a run from Belize authorities on Wednesday filed the requisite paperwork to become a U.S. presidential candidate in the November 2016 election as part of his new Cyber Party.

McAfee, 69, told Reuters in an interview that he wants to put more limits on government's reach into Americans' lives, strengthen privacy protections and "return sanity to the government."

"I would sit down and say, Now I'm the president, please tell me the truth about what's happening here. ... We cannot allow this insanity to continue, because we are on the precipice."

Precipice of what? "The total collapse of society."

In what is now a field of 23 contenders - 17 Republicans, five Democrats and now one independent - in a race already rife with wild cards such as business mogul Donald Trump, McAfee arrives as a free-wheeling candidate, riding in predominantly with Internet reach and social media.

His campaign is housed in an Alabama warehouse and run by 28-year-old Drew Thompson, who has never worked in politics but says he has a master's degree in international affairs from Northeastern University. McAfee said his plan is to cleverly use technology.

Third-party candidates face huge disadvantages but McAfee considers himself a shoo-in because of his "very large and very dedicated fan base."

"I know I have the numbers," he said. "At least 10,000 people in the past few years have said, please run for president. Weird, it's truly weird."

His online celebrity stems in part from his outlaw persona portrayed over recent years through profanity-laced video, gun-toting photos and connection with media outlets during his semi-seclusion and later fugitive status in Central America.

The one-time millionaire fled his home in a former pirate haven in Belize in 2012 after police sought to question him about the murder of a neighbor. They ultimately said he was not a suspect.

Guatemalan police detained McAfee on charges of illegally crossing into the country. He denied any connection to the shooting and said he feared the Belize police would kill or torture him. He was later deported to Miami.

"I take responsibility for all my faults," McAfee said. "If you want to sling mud, I promise you that no one can sling mud at me that I had not already slung at myself publicly.”