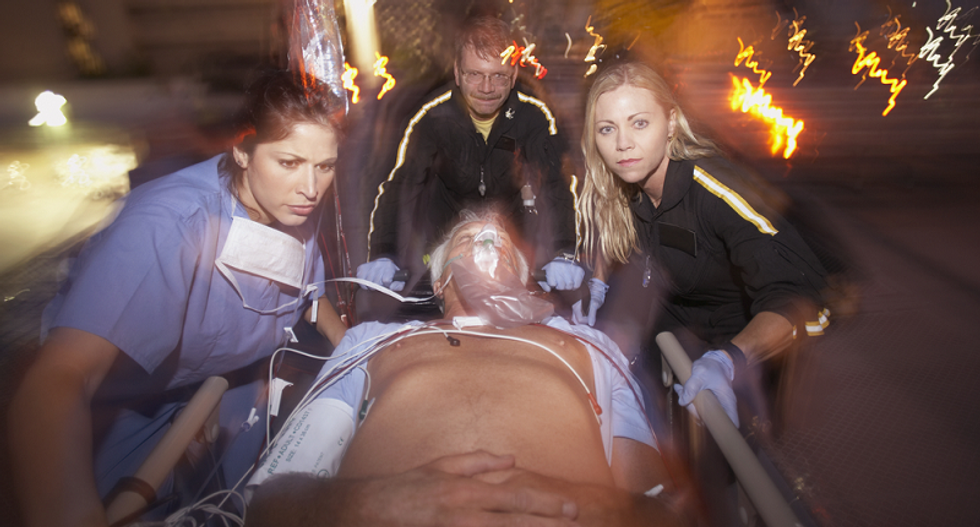 A St. Louis-area jail inmate who was being held on minor traffic violations is lucky to be alive after jailers refused to release him to paramedics who wanted to take him to the hospital, the St. Louis Post-Dispatch reports.

Bernard Scott, 44, was being held in lieu of $360 at the Pine Lawn jail in St. Louis County when he began complaining of abdominal pain and bleeding. Paramedics were called, and though they insisted they needed to transport Scott to the emergency room, a jail supervisor refused to release him. Scott ended up comatose, but has since regained consciousness.

According to a report recovered by the Post-Dispatch via public records request, the medics were about to take Scott and he had changed into his street clothes to get in the ambulance when a jail supervisor turned him back at the last minute. The medics said Scott had a painful mass in his abdomen.

Before leaving, the medics tried one more time, writing in their report that "[Police] again advised by [paramedics] that [patient] should be transferred to [the emergency department] for further medical attention." Still, no go.

But just 14 minutes after the paramedics left, Scott needed another ambulance because his condition had worsened. He was unconscious and his posture indicated he may have sustained brain damage, the medical report said.

Police officers said they found Scott hanging by his neck from a shoelace tied to his door — a claim Scott disputes. He says he doesn't remember hanging himself. Scott says he was told by police he couldn't leave unless he posted bond. The last thing he remembers is making phone calls to relatives in an effort to secure bond money.

The Post-Dispatch points to the incident, which happened last year, as part of a series of problems with St. Louis County jails. It is also among a number of troubling and deadly incidents nationwide in which inmates held on minor charges have died in custody after jailers denied them medical care.

Last month, Michael Robinson, 33, died after family members say the type 1 diabetic was denied insulin in a Missouri jail. He was being held for owing child support.

Also last month, the New York Daily News reported about the 2013 death of Carlos Mercado, 46, who died while being held at Rikers Island in New York. Mercado was also a diabetic who died after asking jailers for his medication and being refused. Jailers reportedly stepped over him while he was unconscious and dying on the floor.

The same month, Raynette Turner, a 42-year-old mother of eight, was found dead in her jail cell in New York. Turner, jailed for allegedly stealing crab legs from a supermarket, told jailers she was feeling ill. She was briefly taken to the hospital but returned to her cell, where she was found dead the day of her arraignment.

The incidents have drawn scrutiny and attention since the high profile jail cell death of Sandra Bland, a 28-year-old black woman who was stopped for failing to signal before changing lanes in Texas. A few days after the encounter with the officer escalated to her arrest, she was found hanging in her jail cell.

*Editor's note: This story has been updated to reflect Pine Lawn is in St. Louis County, not the city of St. Louis.