Stephen Colbert does the impossible: Donald Trump shuts down on birtherism after confrontation 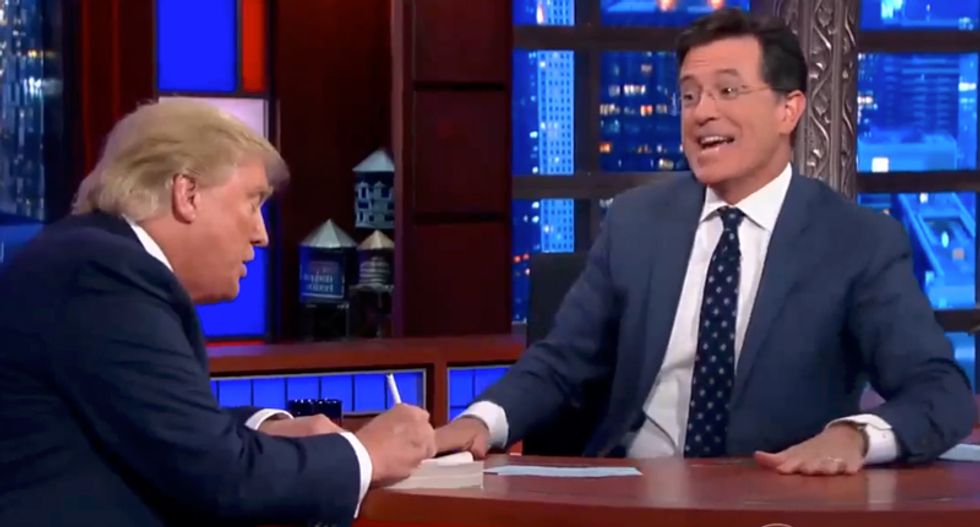 GOP presidential candidate and leading "birther" Donald Trump backed down on Tuesday when Stephen Colbert asked him to spell out his stance on President Barack Obama's birthplace.

"I'm gonna throw you up a big fat meatball for you to hit out of the park right now," the Late Show host said. "This is the last time you ever have to address this question if you hit the ball. Barack Obama: born in the United States?"

Trump, who offered Obama millions in 2012 to produce his birth certificate, immediately tried to demur while Colbert exclaimed, "It's a meatball! It's hanging out there!"

"I don't talk about it anymore," the real estate magnate said after a few seconds. "I talk about jobs, I talk about our veterans being horribly treated. I just don't discuss it anymore"

"You know that meatball is now being dragged down the steps of the subway by a rat right now," Colbert retorted. "You missed the meatball."

"I'm talking about the vets, who are treated like third-class citizens," Trump said. "They're treated worse than the illegals. The vets of this country are so mistreated."

Earlier this month, Trump won the endorsement of an alleged "veterans' group," Veterans For A Strong America -- despite his campaign allegedly not knowing that the organization is in fact one South Dakota man who is banned from hosting events in California, where he appeared at a fundraiser for him.

Colbert also took a moment to thank Trump for running for the presidency.

"I'm not going to say this stuff writes itself, but you certainly do deliver it on time every day," he said.