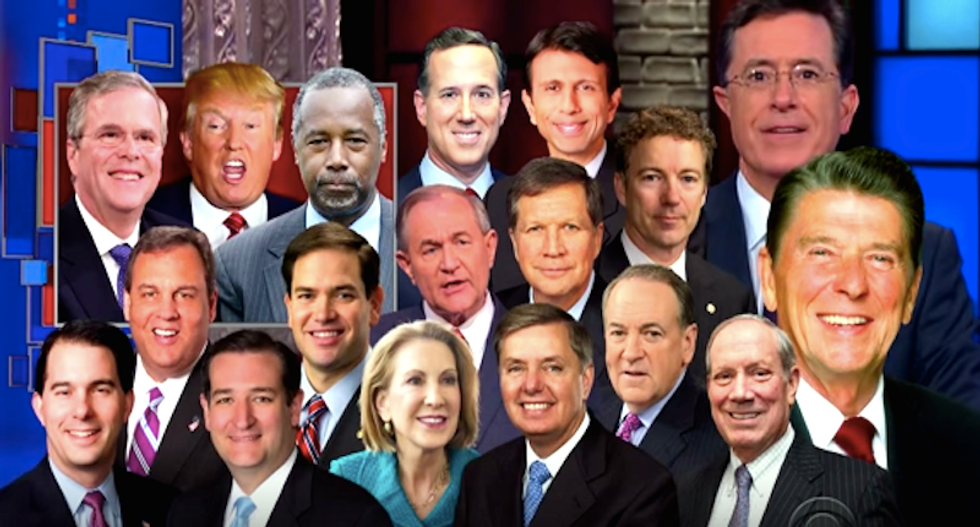 "(Wednesday's) debate was held at the Reagan Library, a Mecca for people who would never compare it to Mecca, so naturally, the Republican field is doing anything they can to get their Ronnie on," Colbert said.

He pointed out that Donald Trump had ripped off his campaign slogan and promised to "make America great again," while Jeb Bush has been sporting a Reagan/Bush campaign T-shirt from 1984, and he joked that Carly Fiorina had not only swiped "the Gipper's" tax policy but had changed her hairstyle to resemble the former president's.

Colbert showed a famous Reagan campaign ad from 1984 that used a bear to symbolize the threat from the Soviet Union, and he showed a remarkably similar ad released this week by Sen. Ted Cruz that featured a scorpion to represent a more vague -- but arguably more menacing -- threat.

"Wait, what does the scorpion represent?" Colbert asked. "Is it terrorism? Iran? Mexicans? Scorpions? A bear in a scorpion costume? What?"

Colbert then played a mock ad of his own that showed spiders in the desert, in Utah, on a nickel -- and in the viewer's bed, where the narrator warned the insect might crawl into your ear and lay eggs.

"Oh yeah, it happened to the cousin of a guy I went to camp with," the narrator intoned. "Spiders: They're hatching in your brain right now."