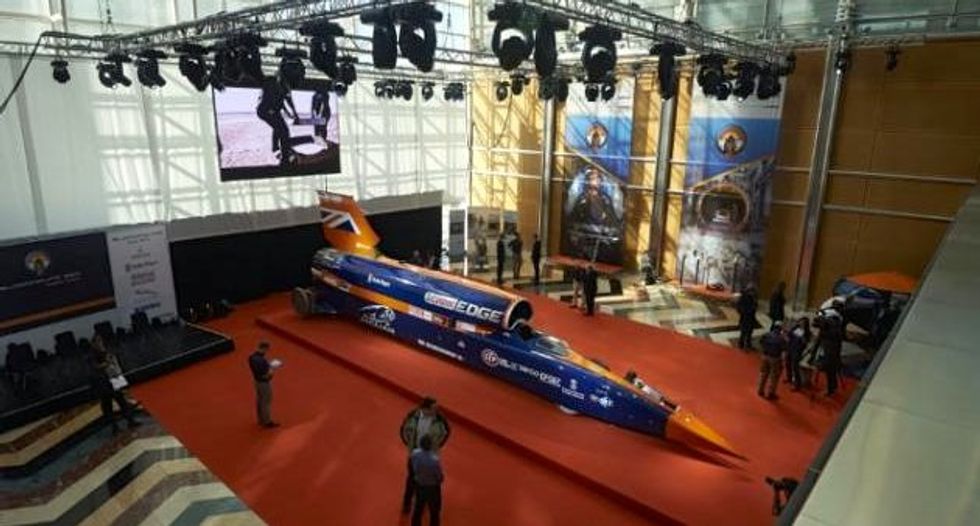 AFP/AFP - Visitors look at the Bloodhound Supersonic Car, a 135,000-horsepower car, at Canary Wharf in east London on September 24, 2015

Don't want to do your maths homework? A rocket-powered car that could break the world land speed record and travel at over 1,000 miles per hour (1,600 kilometres) per hour could be the solution.

The Bloodhound Supersonic Car (SSC) unveiled in London on Thursday is an engineering marvel that its builders hope will inspire a new generation of engineers like the Space Race during the Cold War.

With a fighter jet engine and rockets, the sleek 135,000-horsepower car is as powerful as 180 Formula One racing cars and will go faster than a bullet.

In 1997, Royal Air Force pilot Andy Green established the current record of 1,228 kilometres per hour -- faster than the speed of sound -- in the Nevada desert in the United States on board the Thrust SSC.

Almost 20 years later, Green is planning to get behind the wheel again and beat his own record.

"We want to set the bar so high that it will be very difficult for anyone to take, it," project director Richard Noble told AFP.

The £15-million (20 million euro, $23 million) car is a jumble of hi-tech that relates as much to aeronautics and aerospace as to the automotive industry.

The cars has three power plants - a Rolls-Royce EJ200 jet from a Eurofighter Typhoon, a cluster of Nammo hybrid rockets and a Jaguar V8 engine that drives the rocket oxidiser pump.

The cockpit looks like the one on a jet, including the oxygen mask.

"It's like an airplane but on four wheels," said Mark Blackwell, a technician on the project.

Beating the record is a big motivator for the team but is not an end in itself -- their aim is also to give a taste for science to a new generation.

"We had a meeting with the Ministry of Defence and they said we have a terrible problem -- we can't recruit scientist engineers," Noble said.

"In the US during 1961 to 1972, the number of PhD achieved in science education increased by 300 percent" because of the space race between the United States and the Soviet Union, he said.

More than 100,000 children from 6,000 schools in Britain and 1,000 in South Africa are involved in an education project around the Bloodhound (www.bloodhoundssc.com).

Noble said that footage of the car and data relating to the project is all uploaded onto the website and this information is then used by teachers for classwork.

"What you've got here is an enormous global online game," he said.