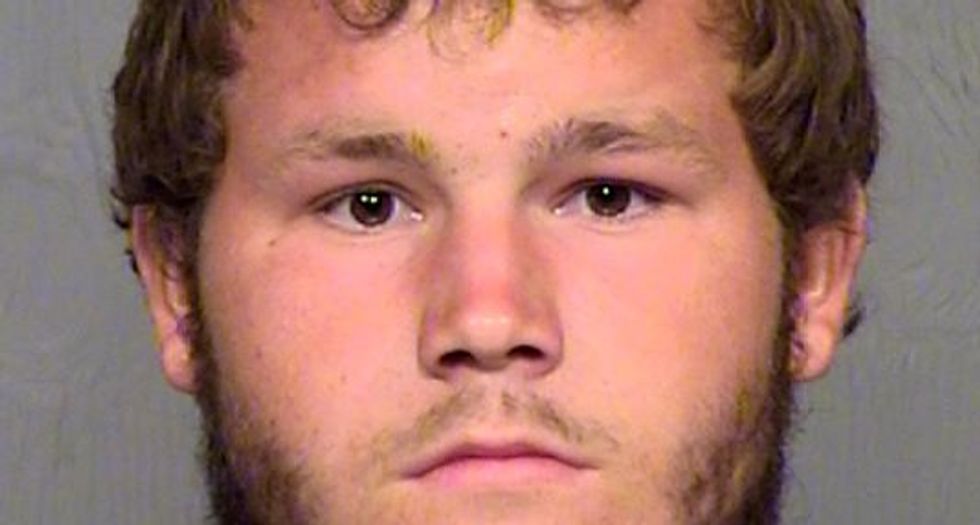 The suspect in Arizona's spate of recent highway shootings was formally charged on Wednesday with 16 felonies including drive-by shooting and aggravated assault, prosecutors said.

Leslie Allen Merritt Jr., a 21-year-old landscape gardener from the Phoenix area, was also charged with unlawful discharge of a firearm, disorderly conduct and endangerment in connection with the first four of the shootings along a 10-mile (16-km) stretch of Interstate 10 where it passes through the city.

Despite the head of the state police describing the shootings as "domestic terrorism," there was no mention of that in the complaint filed by county prosecutors.

A spokesman for Maricopa County Attorney Bill Montgomery said the evidence gathered did not support such charges. A spokesman for the state's Department of Public Safety said the motive behind the shootings was still not known.

Merritt, who remains in jail on a $1 million bond, is accused in the first four of at least 11 possible shootings. Only one person suffered a minor injury, but many motorists were unsettled by the incidents, and some said they had been avoiding Interstate 10 if possible.

Merritt has maintained his innocence, telling a court commissioner authorities had "the wrong guy," and that a handgun he owns and which police believe was used in the crimes was in a pawn shop at the time.

Three possible shootings were reported on Aug. 29, including one in which the windshield of a sport utility vehicle shattered and a 13-year-old girl sustained a cut ear.

In court documents, investigators contested Merritt's statement made on Sept. 19, and said his handgun had not been pawned while the shootings were taking place.

Merritt was arrested without incident on Sept. 18 while entering a Wal-Mart store after police said they were able to "forensically link" four of the shootings to his handgun, which was found later by investigators at a local pawn store.

Arizona Department of Public Safety spokesman Bart Graves said bullets from the handgun discovered at the store were then matched to fragments found at some of the shooting scenes.

Graves said on Wednesday that the investigation continues, and that the possibility remains that the other seven incidents were done by copycats.