'Take what you need and leave the rest': Here's why atheists love Pope Francis 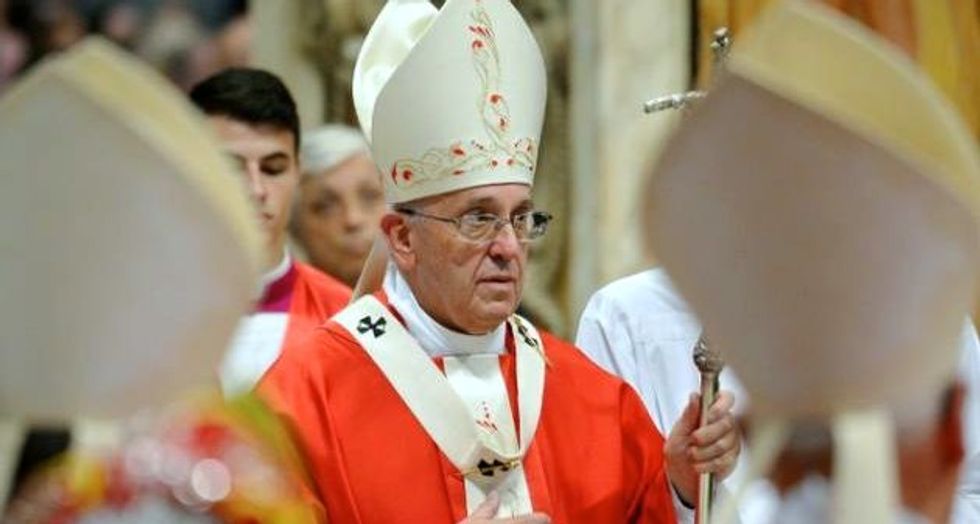 “If it’s interesting, pay attention. If you think it’s nonsense, look at other things.”

This was the Dalai Lama’s instruction to 65,000 people in Central Park in September 2003. The crowd likely heeded this command: though it featured its fair share of Tibetan Buddhists, many thousands came to see him out of curiosity, and out of respect for his universal moral leadership.

This week, when Pope Francis addresses an estimated million people in Philadelphia, his attendance is also likely to be more diverse than usual.

Though Catholics from around the world will descend on the US northeast to listen to their leader, crowds will be infiltrated by non-religious admirers. Quotable because of the simplicity of his speech and relatable because of the plainness of his gestures, Pope Francis ignites unprecedented secular excitement. He is admired in spite of his Catholicism, rather than because of it.

“I have not been a fan of the Catholic church for a long time. I would have avoided seeing a pope at all costs in the past. But I just think this is someone who is so enlightened and progressive,” said Dan Nainan, a comedian and corporate speaker who has tickets to attend mass in Central Park.

Nainan mentioned the pope’s remarks on LGBT issues and women as some of the more surprising comments that triggered his change of heart: “He is proposing things that you could never dream of coming from the Catholic Church. It isn’t enough for me to convert to Catholicism, but I’m excited to hear what he has to say.”

Jennifer Vanderslice could not get tickets to see the pope in Philadelphia, but will be volunteering at the World Meeting of Families – the gathering of Catholic families that concludes with the papal visit after several days of prayer and religious instructions and lectures – in order to be part of the experience. Her admiration of the pope, she says, is similar to her admiration for leaders like the Dalai Lama and several new-age writers who focus on unification rather than division.

“He is such a worldly and non-judgmental pope and is so dynamic. He will never change me into a Catholic but I do like the way he is spreading peace and talking about helping the poor and the less fortunate,” Vanderslice said. “It is refreshing to hear a pope who can strike a chord in so many people, whether they’re Catholic or not. You can take what you need and leave the rest.”

Though atheist groups like the Freedom From Religion Foundation are actively campaigning against the enthusiasm with which secular American institutions greeted Pope Francis, others are more measured.

“The life of a responsible adult is always filled with compromises. When an influential voice supports some of your causes, it may not be the right time to remind the world of all the negatives,” says Dr Daniel Dennett, the cognitive scientist and philosopher who is well-known for his atheism and his championing of secularism. “It’s always a judgment call, to which there is no right answer.”

Of course, not everyone agrees.

“Yes, Pope Francis has expressed compassion for gays, de-emphasized social issues, and made it temporarily easier for women to repent for having an abortion. But Francis has carefully avoided challenging or altering the church’s fundamental doctrines on contraception, abortion and gay marriage,” Suzy Khimm correctly notes in the New Republic.

On the other side of the political fence, Ramesh Ponnuru at the National Review wrote that the pope too often mixes his personal stances with Catholic doctrine: “Pope Francis’s recent encyclical on the care of the earth, which was widely taken to be a kind of environmentalist manifesto, combines authoritative Church teachings … with expressions of personal opinion. In certain respects, Laudato si’ is a cri de coeur against modernity – although an incoherent one.”

‘He will draw people back to the church’

Christina Daniels and her husband Gary Frisch are hosting an out-of-town visitor coming to see the pope in their home in southern New Jersey. They are among thousands of people offering up space to pilgrims making the journey to see Pope Francis.

Related: Have you met a pope? Share your photos, videos and stories

Frisch is Jewish and is serving as a volunteer at the World Meeting of Families. As for Daniels, her Catholic roots make her especially interested in the pope’s agenda of inclusivity.

Daniels divorced her first husband because of domestic violence, a reason that is not considered justification for annulment in Catholic doctrine. “Francis seems more welcoming and more willing to listen to folks in situations that were ignored, or outright scorned by the Catholic church,” Daniels said via phone. “When I do go to mass, I can’t participate fully and that is painful. I think he will draw people back to the church.”

John Opperman, the executive director of the Earth Day Initiative, sees the pope’s strong remarks on environmental justice as inspiring because they are coming from such an authority. “It doesn’t get much more establishment than the Vatican. He isn’t someone you could feel comfortable writing off,” he said.

This feeling is shared by the National Domestic Workers Alliance, a group which is in the midst of the “100 Women, 100 Miles” pilgrimage to demonstrate against immigrant detention during the pope’s visit. But what would have been protests in years past are now celebrations. “Pope Francis has said that the globalization of migration requires a globalization of charity and cooperation,” reads the campaign website . “When he comes to Washington, we will be there to greet him with the hope that each step we take is another step closer to a world of dignity for migrants.”

This is, in some ways, a return to form for the church. The papacy was always intended for global leadership and Catholic doctrine to this day states that it is the one true church. The gospel message is clear that it is intended for “all nations”, whether they see themselves as part of Christendom or not.

While the spread of this message has historically been interpreted through violence and division, Pope Francis is opening doors to forgiveness and reconciliation through messages that make people feel welcome rather than excluded. He has not changed much doctrine, nor has he made explicit calls for legislation a part of his papacy.

But as a hugely visible symbol of moral authority in the world, he is inspiring more people to action than his predecessors or political contemporaries. And for this reason, we should pay attention.