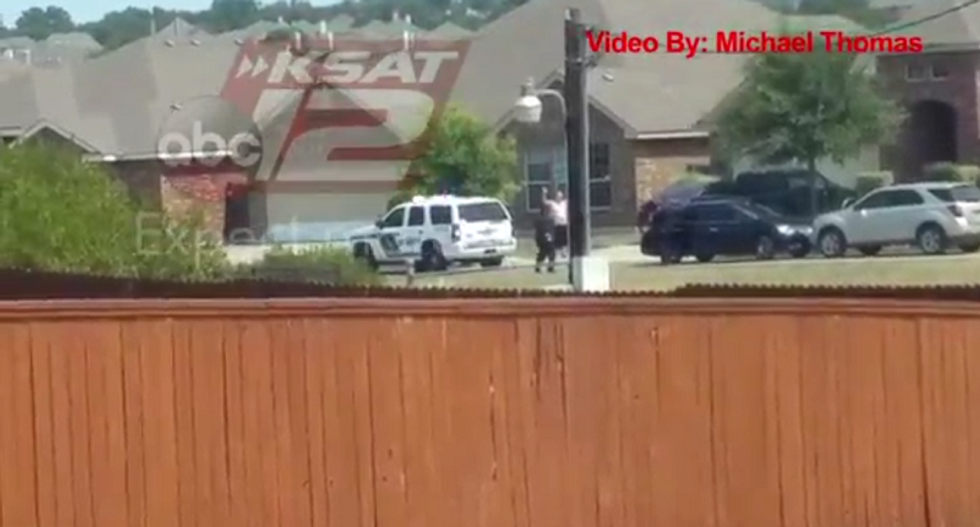 An audio recording released on Wednesday of a conversation between a dispatcher and Texas county deputies, whose fatal shooting of a man raised questions of whether they acted properly, indicate the man was armed and suicidal and had just harmed his wife and baby.

Gilbert Flores, 41, was killed on Friday by two Bexar County deputies. A cell phone video of the incident, which took place near San Antonio, appeared to show the victim with his hands in the air before being shot.

The dispatcher's audio was made available to the media by a source in the Bexar County Sheriff's Office. In it, the dispatcher is heard telling deputies that Flores has a knife but the audio does not indicate how she came into that information.

"He is threatening suicide by cop," the dispatcher said, referring to a person who is intentionally using the threat of deadly force to provoke officers into shooting them.

The dispatcher also tells an ambulance crew called to the home that "the male that called it in assaulted his wife and child, so possibly two patients," indicating it was Flores who called the 911 emergency number.

The comments on the audio also indicate that shots had been fired before the shots that killed Flores, although the dispatcher does not say who fired them.

Sheriff's officials have said Flores was armed but did not indicate what weapon he had.

Activists said the video, which was broadcast on a local TV station KSAT this week, shows Flores was unarmed and appeared to surrender when he was shot.

The video, made from more than a block away by a bystander, does not include any conversation between Flores and the deputies.

The two deputies involved in the shooting, Greg Vasquez and Robert Sanchez, have been placed on administrative duty pending an investigation, as per protocol.

The deputies and the victim are Hispanic. Special Agent Michelle Lee said civil rights investigators from the FBI will review the case.

The shooting came after questions have been raised about racial bias in U.S. policing due to incidents that sparked protests nationwide, including the killing of an unarmed black teenager in the St. Louis suburb of Ferguson, Missouri, a year ago by a white officer.