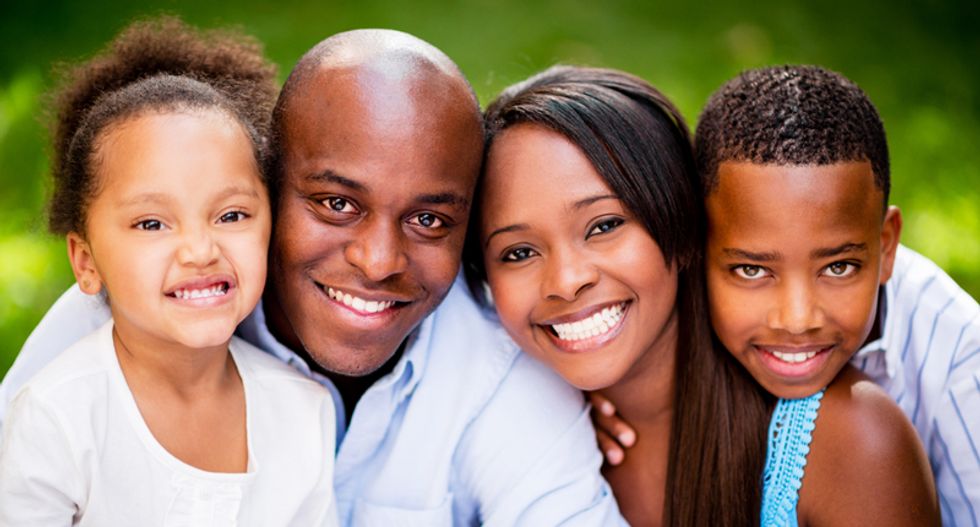 There are stories that we like to tell ourselves to account for large systemic imbalances in our society, myths that we employ to feel comfortable in our analysis of social problems. Melanin makes you violent is a stupid, strange fiction; it absolves society from ever confronting the prejudice that is inextricable from policies; it perpetuates legal segregation without ever admitting that segregation is deliberate; it masks our complicity in allowing the growth of the carceral state by suggesting it must always be so.

On Wednesday, a new study by Ella Baker Center for Human Rights , Forward Together and Research Action Design put the lie to our self-serving fictions. The disproportionate criminalization of African Americans has served to reinforce segregation and income inequality over generations, and African American men are not its sole victims.

The study found that on average families with an imprisoned relative paid $13,607 in court-related costs. In addition, one in five families who participated in the study reported that they had to take out a loan to cover these costs. One in five families were unable to afford housing expenses due to the loss of income from their loved one’s incarceration. Two out of three families had difficulty meeting basic needs as a result of their loved one’s conviction and incarceration. 83% of family members primarily responsible for these costs were women.

There are over 2.2 million Americans currently in the prison system, accounting for 25% of the world’s prison population, the highest of the industrialized nations. It is estimated that 58% of the nation’s incarcerated are black and Latino men .

Black families are and have always been imperiled by aggressive criminal justice policies and demonized for their effects; the disintegration of black families then blocks the formerly incarcerated from accessing basic necessities for survival. That hardship only perpetuates systemic income inequality, and this hardship is shouldered disproportionately by black women.

In the latest cover story by Ta-Nehisi Coates, out in the October issue of the Atlantic, The Black Family in the Age of Mass Incarceration , Coates makes a case that a dystopian fairy tale about African-American family structures has accompanied the rapid rate of incarceration of African Americans as far back as 1965. At the height of the civil rights movement, then Assistant Labor Secretary Daniel Patrick Moynihan released The Negro Family , a report intended to address black urban poverty yet intentionally omitted tangible policy recommendations. Instead, it built the base of the family-centered magic fix rhetoric ubiquitous in our ongoing discussions and implementation of vast urban public policy from housing, schools and finally, the unprecedented rise of mass incarceration that disproportionately affects poor black families.

The Moynihan narrative is one of the reasons why the government created racist, classist policies that incentivized the dissolution (or non-formation) of black families, then problematized black people for not having them. In an interview, Joyce Ladner – a student at Washington University in 1964 –recalled her experiences working as a research assistant for a National Institute of Health funded study that focused on the lives of women and girls in public housing: “The welfare department had a rule that no able bodied man could be in the house if a woman received aid for dependent children.”

Moynihan’s myth that African-Americans are incapable of building and maintaining family structures was so persuasive that, to this day, it’s used to justify the warehousing of people from derelict and underserved communities. It is also employed to justify moves to divest from urban centers that would produce opportunities for the people of ‘poor moral character’, who only have ‘poor moral character’ because they were born poor.

The zeal in which society sought to address violence and poverty pervasive in urban black communities by actively destroying families is evidenced by state and federal laws creating greater punitive measures for the incarcerated from New York State’s Rockefeller drug laws of to the Clinton Administration’s 1994 Crime Bill compounded by layers of rules within the bail bond system that ultimately fuels recidivism.

As the Black Lives Matters movement has striven to show, the absence of black men fills many of our institutional origin stories, but the problem isn’t our insufficient commitment to traditional family structures. The idea that black people fill our prisons because they are inherently violent and have flawed family structures has never been true. It is time to acknowledge the deliberate destruction of our family structures and stop peddling harmful, racist myths.