'The Democratic field consists of a wild-eyed socialist': Ted Cruz jabs at Dems during Michigan conference 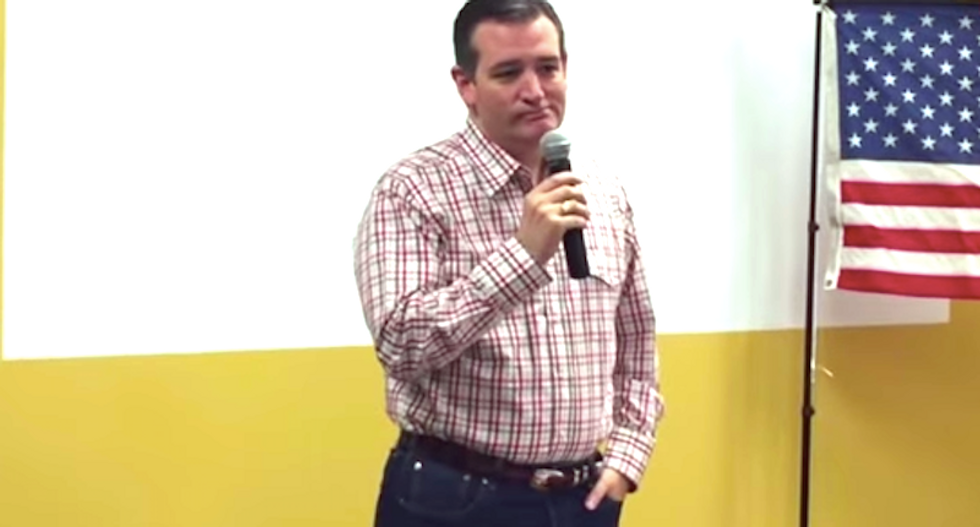 On Saturday, the Texas senator and presidential hopeful Ted Cruz sought to connect with a Republican establishment crowd – in part by telling them jokes.

“So now,” he told the Mackinac Republican Leadership Conference , “the Democratic field consists of a wild-eyed socialist with ideas that are dangerous for America and the world … and Bernie Sanders.”

The remark elicited laughter. Jabs at Hillary Clinton aside, Cruz struck a chord with his call to drastically shrink the size of government.

So did John Kasich. The Ohio governor said: “One of the most important things we have to do in this country is shift the power from Washington back to the states.”

Cruz was first on stage, and more than 2,000 activists and donors looked on as the darling of the Tea Party movement, who has consistently polled in the middle of the 16-strong Republican field, punctuated his remarks with references to the anti-establishment wave riding through the far right of the party. That wave has placed two non-professional politicians, Donald Trump and Ben Carson, at the top of the polls.

“We are seeing an awakening sweeping this country and let me tell you right now, help is on the way,” Cruz said.

On day one in the White House, Cruz said, he would strike out “every illegal and unconstitutional action” taken by President Obama through a series of executive orders used to bypass a Republican-controlled Congress.

He added: “My pen has got an eraser.”

The senator shifted to the controversy surrounding Planned Parenthood, saying he would order the Department of Justice to launch an investigation into what he called “horrible videos”.

The videos, released by an anti-abortion group , allege that the women’s health organisations profited from the sale of aborted fetal body parts, a claim the organization denies.

Cruz also vowed to end the “persecution of religious liberty” in the US, and to “rip to shreds” the Iran nuclear deal . “If this deal goes through,” he said, “the Obama administration will become quite literally the leading financier of radical Islamic terrorism in the world.”

That is a claim the president denies. The deal – negotiated by Iran, the US and five other world powers – has survived Congressional attempts to block it.

The first day of a Cruz administration would apparently be a busy one. Cruz said he would immediately set about reforming “the alphabet soup of federal agencies” he said inhibit economic growth. He would also rein in the Environmental Protection Agency “and in the days that follow … pass fundamental tax reforms”, moving the US to a flat tax.

Calling for the abolition of the IRS, he tried another joke, suggesting that the agency’s 90,000 employees be moved to the Mexican border.

“If … you’re swimming across the Rio Grande and the first thing you see is 90,000 IRS agents,” Cruz said, “you’d turn around and go home.”

Earlier in the day, Cruz had spoken at the Mackinac school gym, where he ended his remarks in similar fashion. Though the main conference is typically considered a gathering for establishment Republicans, the senator’s campaign had a strong presence.

One audience member, Irving Ginsberg, a retired physicist and University of Michigan lecturer, said Cruz has his vote. He particularly appreciated his remarks about the Iran deal.

“The agreement is a catastrophe,” he said.

Kasich, meanwhile, has enjoyed rising poll numbers following his performance at Wednesday’s second Republican debate. He emphasized his experience as a politician, and said: “My mother used to tell me, ‘Johnny, it’s a sin not to help people who need help, but it’s equally a sin to continue to help people who need to learn how to help themselves.’”

While Cruz framed his remarks around a vision for the future, Kasich opened with a rundown of his political backstory and, perhaps, an attempt at Cruz-esque humour.

Just one month after beginning classes at Ohio State, he said, he made an appointment to see the university president. The president informed the 18-year-old Kasich he knew President Richard Nixon. Unfazed, Kasich asked the president to send a letter to Nixon – and was rewarded with a trip to the White House.

The long-winded anecdote drew, eventually, to a conclusion: the 20-minute meeting with Nixon was a more memorable achievement than his 18-year stint in the US Congress, Kasich said.

Related: Trump: I was not obligated to correct questioner who called Obama Muslim

According to a poll from VoterGravity, after Wednesday’s second debate, Kasich received 9% support among more than 2,800 New Hampshire Republican primary voters, placing him fourth in the mix.

The former chairman of the House budget committee received praise from several prospective voters on Mackinac Island for his cool demeanor and sense of calm – an unusual trait in a Republican field led by Donald Trump and his like.

Kasich didn’t win over attendee Jerry Clixby, though. He said: “Right now, he’s not on my short list.

“I’m looking for someone who’s a small government guy,” Clixby said, adding that he wasn’t swayed by Kasich’s call to shift power to state governments.