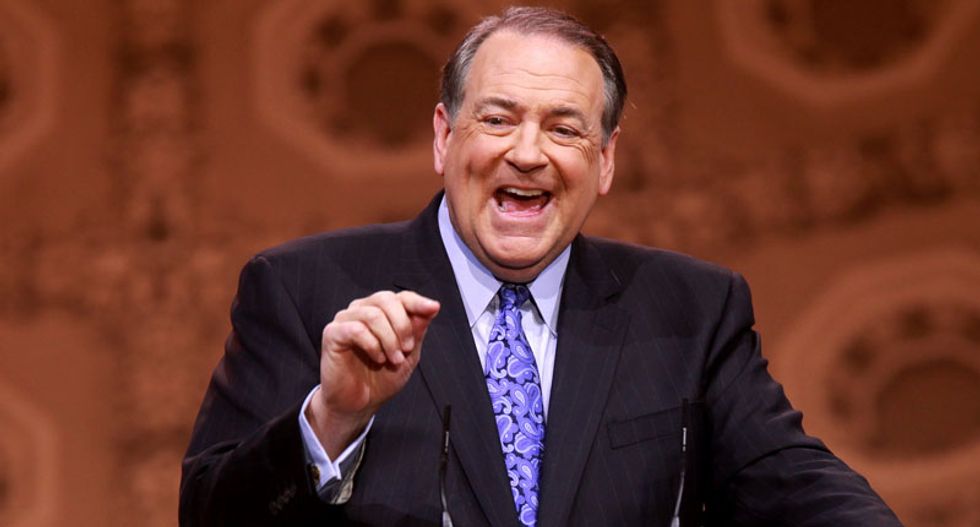 The saga of Kim Davis, the Kentucky county clerk who went to jail for a weekend rather than sign off on same-sex marriage certificates, might seem like it’s a last gasp for the anti-gay right; an attempt to eke out some kind of victory after having lost their two-decade fight against same-sex marriage. Unable to stop same-sex couples from marrying, Davis, along with a handful of anti-gay florists and bakers, strives instead to just make getting the license an embarrassing hassle. It’s childish sore loser behavior, the equivalent of a baseball player pouting in the dugout and refusing to shake hands with his opponent because he didn’t win the game.

Because of this, liberals can be forgiven for laughing and moving on, not particularly worried about Davis, whose temper tantrum isn’t even preventing the licenses from being issued any longer, as the judge authorized her deputies to hand them out.

Unfortunately, though, Davis’s behavior isn’t just a bratty tantrum. This whole incident is also a sign of a troubling development in the religious right: As their cultural power declines in the face of growing diversity and liberalism, religious conservatives are embracing scary levels of radicalism. They don’t have the numbers anymore, so they are turning to scarier and more radical demands to seize power in any way that they can.

No doubt Davis is a comical figure whose self-righteousness is only equaled by her ignorance both of the text of the Bible she clings to and what it means to have a job as a government employee. But she’s being used by her legal team and other religious right leaders to spread the idea that religious conservatives are entitled to ignore -- or even overthrow -- democracy and seize power just because they feel like it.

Some supporters, like Ryan Anderson of the New York Times, are claiming that Davis wants an “accommodation” for her religious beliefs. This is, to put it bluntly, a lie. Davis was offered just such an accommodation and told that she doesn’t have to personally issue the licenses so long as her deputies were allowed to do so. She declined that compromise, insisting that she be able to actually prevent same-sex couples from getting licenses in her county altogether.

What Davis is asking for is not an accommodation at all, but for the right to declare, by fiat, that Rowan County, Kentucky, is a mini-theocracy not beholden to the laws of the land, but by the whims of Kim Davis. Her legal team wants you to see her as a sweet but faithful woman, but in fact she’s trying to pull a coup here, claiming that “God’s authority” -- read Kim Davis’s authority -- trumps our entire democratic system.

It’s not just her, either. Rena Lindevaldsen, who works for the Liberty Counsel that is handling Davis’s case, has taken to boldly arguing that Christians have the right to overthrow the democratically elected government and simply impose their will by fiat. “Whether it's zoning or taxes or marriage or abortion, in those issues, government doesn't have authority to say that these things are appropriate because they're contrary to Scripture,” Lindevaldsen recently argued in front of Liberty University. Which is to say that even though the government has declared abortion legal, if you decide you don’t want your neighbors getting abortions, you should be able to declare yourself a God-appointed authority and simply shut it down. If you don’t want to pay taxes, declare yourself a “sovereign citizen.”

Mike Huckabee has been at the frontlines of pushing the claim that Christian conservatives simply have the right to ignore or overturn democracy to impose their will, and not just because he’s been running around Kentucky, trying to get himself on camera as much as possible in support of Davis’s attempt to ban gay marriage by fiat. He’s also been using the campaign trail to argue that the president should be able to simply end rule of law and start ruling like a dictator.

He doesn’t use the word dictator, of course, but make no mistake, Huckabee has repeatedly and shamelessly promised that if he is elected president, he will start declaring his beliefs to be the law of the land without the cooperation of Congress. In a Google hangout, he laid out the scheme: Declare as president that there are “constitutional rights of the unborn” and simply ban abortion by fiat. He claimed a similar authority during the Republican debate, a moment that got startlingly little play even though it was literally a candidate for president arguing that he would make himself a dictator.

Despite his regular references to the constitution when making these proclamations, Huckabee’s scheme would mean voiding out the constitution, as well, and not just because, despite his claims to the contrary, there is not a single word in it that gives citizenship status to embryos. It’s also because his scheme would mean ending the balance of powers, concentrating all the power of the legislature and the courts into the hands of the president.

And once you believe that your interpretation of what God wants trumps rule of law, not just for yourself but for your neighbors, then it follows very quickly that you are entitled to use force and even violence to get your way.

Some religious right leaders are, in fact, making noises that sound very much like justifying the use of violent force in order to overturn the social progress brought upon the U.S. from the democratic system. “No one should want it and no one, myself included, does want it,” conservative pundit Erick Erickson argued in an op-ed about the Davis case. “But how much longer until we have another civil war?” You can be forgiven for being skeptical of his claim not to want this, of course. On the contrary, it reads very much like a threat: Either give up the gains made under the democratic system or face violent overthrow by religious fanatics.

Huckabee plays the same game of fantasizing about violent struggle to overturn democracy while pretending to abhor violence. In his Google hangout, he said that he expected that banning abortion by fiat would likely result in “extraordinary pushback, and goodness, perhaps riots in the streets.” He’s not wrong that simply dissolving rule of law and declaring yourself the sole authority would likely result in people resisting, but he shrugged this off as merely the price of doing business.

To be clear, all these fantasies of governmental overthrow to stop gay couples from marrying will likely remain fantasies. The religious right is aging and losing numbers quickly. This is why they’re getting increasingly fanatical in their rhetoric, of course, but it also makes it hard to imagine they could really get it together to act out their fantasies of seizing power by force.

Still, this isn’t just talk. The Republicans are still beholden to the religious right in many ways. The fact that so many Republican candidates were afraid to defend the rule of law and denounce Davis for her actions is a troubling symptom of this. The Christian right may not be up to armed revolution, but they are increasingly demanding that Republicans turn their backs on the basic rules of democracy to cater to a theocratic minority. That Republicans are listening is a danger to us all.