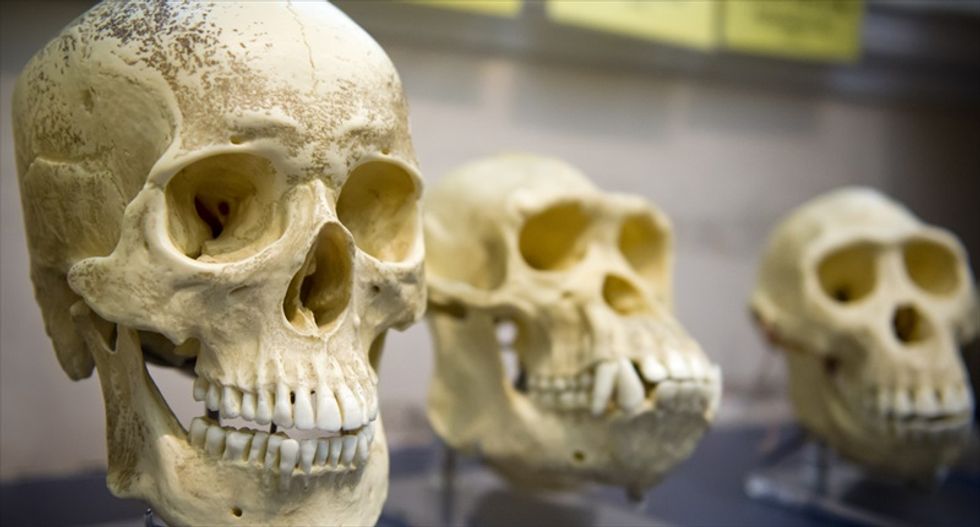 This missing link imagery, based on the idea that evolution is a methodical process with logical, continuous connections to be discovered and mapped, might set up a good story. But it’s wrong – and can detrimentally influence our understanding of immediately threatening processes like the rapid evolution of flu.

The Great Chain of Being

The notion of missing links in evolution comes from medieval theology’s Great Chain of Being, an idea that survived Darwin and still persists. It is compelling – not least because you-know-who winds up at the presumed pinnacle of evolution.

On the left of this figure is the usual picture of life on Earth, a chain of creatures smoothly lined up from fish, through frogs, lizards and on up to human beings. The idea is that, step by step, life continually “advanced” to gain greater and greater complexity. The Great Chain of Being is ingrained enough that it’s even become a way for comedy and cartoons to mock the zeitgeist.

But what is the figure on the right?

Both are correct and show exactly the same information about the relationships – humans are more closely related to monkeys than both are related to lizards than all are related to frogs, and so on. But we know people are not a link between fish and frogs in any meaningful sense. Any of the nodes in a family tree can be rotated without changing the correct relationships among the present-day members – the rotation on the left is the usual one just because we like to be on top!

The power of this kind of imagery in science could not have been more starkly revealed than in the positioning of Lokiarchaeota as a missing link in such a fictional chain.

One of the great triumphs of our understanding of life is that the eukaryotic cell, your kind of cell, is an ancient fusion through symbiogenesis of entirely disparate life forms. It’s a chimera or Frankenstein. The microbe Lokiarchaeota is a hodgepodge of disparate elements resembling the three Domains of Life, some of which we share. It is a Frankenstein we have not seen before, but a Frankenstein nonetheless – not a link in a chain.

We see more and more such startling discoveries, all arising from our use of new molecular technologies to explore the Earth’s biodiversity. For example, Penny Chisholm’s lab at MIT has discovered viruses that have borrowed cassettes of photosynthetic information from marine plankton. A remarkable discovery, but not because it is a missing link between viruses and plants.

The continuous chain imagery, step-by-step and link-by-link, is all-pervasive in how we think about evolution – and it affects your daily life. Consider flu, which requires yearly vaccination because it constantly evolves to evade our immune system; what protected you last year will not protect you this year. Ignoring the thankfully rare emergence of monstrosities like Spanish Flu after WWI, the never-ending evolution of the influenza virus is typically modeled as occurring by antigenic drift – a smooth, continuous wander through evolutionary space, finding new places to hide from the immune system.

But we cannot content ourselves with old narratives just because they are comfortable and familiar. Theoretical epidemiologist Sunetra Gupta presents the case that many infectious diseases, including influenza virus, evolve by the reassembly of old parts from disparate sources, not by a continuous evolutionary stroll somewhere new. Rather than a Blind Watchmaker tinkering with last year’s model – Richard Dawkins' famous image of evolution – a Mad Scientist assembles new Frankensteins each year in his laboratory.

Certainly, the new flu vaccine you get each year does not sound like a link in a continuous chain; it’s more like a mixture of A/New Caledonia/20/99 and B/Shandong/7/97, blended from past disease strains. Gupta and her group at Oxford contrast the cozy classical notion of antigenic drift with antigenic thrift, which conjures the apposite image of rooting around in a charity shop to find old clothes to make a new outfit.

Which view of the evolution of the influenza virus is correct is currently the subject of active and contentious scientific study.

The point is that metaphors have great power in science. They’re not forced on us by reality, though.

The importance of powerful images for the public understanding of science cannot be overstated. Previously, the world press treated us to the Late Night Double Feature Picture Show of scientists digging up the graves of corpses in the Arctic permafrost to reanimate in the lab the deadly 1918 influenza virus that originally killed them. This remarkable flu study would likely have passed with less fanfare if not for the connection to popular myths. Thanks Mary Shelley!

But we must choose our metaphors wisely, lest we be misled. The Great Chain of Being, strung through evolutionary space by Blind Watchmakers, with missing links waiting to be discovered, isn’t going to help us understand infectious disease.