The unbreakable Kimmy Davis: The marriages, the martyrdom, the musical 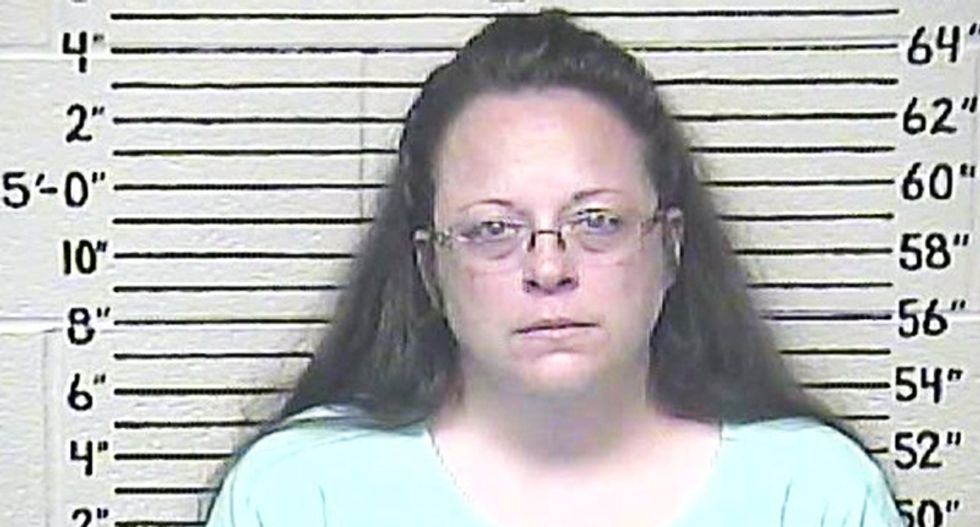 There is much to enjoy about the saga of Kim Davis, the Kentucky county clerk who loves marriage so much that she has had four of them and won't share with the gays.

Because she is also a Bride of Jesus, her cause -- as well as  her incarceration for being bad at her job -- has given the God-botherers of America a real workout trying to make her into a good old-fashioned martyr like they used to make in the good old days of stonings and crucifixions and such and such.

For Christian masculinist and yoga pants bête noire, Matt Walsh, the persecution of Kim Davis is another sign that America is going to H-E-double hockey sticks in a handbasket, and he is having the meltdown to prove it:

I mean, the rule of law? THE RULE OF LAW? Sorry for screaming, but I’m afraid my head might explode if I see or hear one more leftist use that term.

What follows is a Mad Libs of spittle-flecked Twitchy-esque outrage at the unfairness of it all without even a hint that, hey, maybe Jesus is just testing Matt. He (God, not Matt) works in mysterious ways like that, I am told.

Mollie Hemingway, who makes a living at The Federalist being all judge-y about how people are living their lives ALL WRONG, wants everyone to stop calling Davis -- who has been accused of being a hypocrite when it comes to the God's rules about marriage --  a man-collecting slut-whore. The way Mollie sees it, Davis left her wild ways behind her when she converted to Jesus-dom four years ago -- so that stuff it is off-limits.

Now, if you disagree with journalists on the marriage topic, you should be prepared for them to go after you. They are still taking their time investigating almost any angle associated with Planned Parenthood’s harvesting of organs from aborted children, mind you, but they wasted no time doing a deep dive into Rowan County Clerk Kim Davis’ past. Perhaps the most interesting thing about her past, given that she’s waging a (losing) religious liberty battle, is that she is apparently a recent convert to Christianity — her conversion took place “about four years ago,” according to her legal counsel.

Keep that in mind. She converted to Christianity about four years ago.

As we all know, finding Jesus can white-out all past indiscretions including having kids out of wedlock and collecting husbands like they're NASCAR commemorative plates.

Anyway, Mollie wants you all to stop slut-shaming Kim Davis. Slut-shaming is her gig anyway, saved for tramps who take nekkid pictures of themselves and whores who give it away for free before they get opposite marriage hitched by Kim Davis

It would be sin against the Father, the Son and the Holy Ghost if the below handiwork by writer James Trumm was lost in the churn and boil of so much being written about the previously obscure -- but one for the ages like Ashley Todd -- Kim Davis: Kentucky moralist, slacker and serial bride.