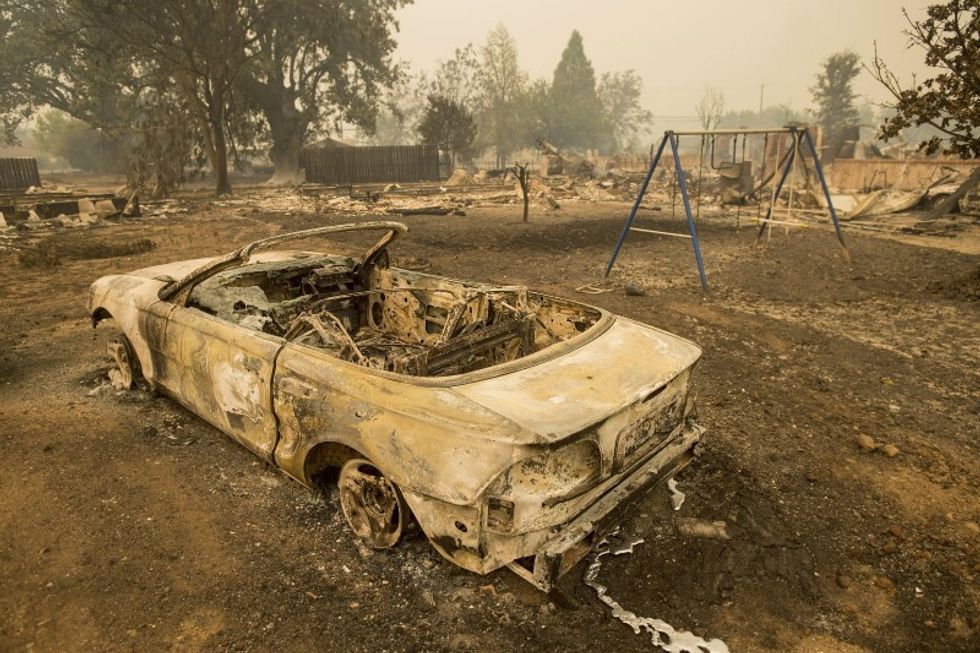 Burned out remains of a vehicle and swing set scorched by the Valley Fire line Jefferson St. in Middletown, California September 13, 2015. REUTERS/Noah Berger

A fast-spreading wildfire threatened more towns in Northern California and sent more evacuees fleeing on Sunday, a day after sweeping through the town of Middletown and leaving behind smoldering buildings and ashen hulls of cars, according to media and official reports.

Governor Jerry Brown, whose state has been battling several wildfires in recent months, declared a state of emergency in areas hit by the blaze, dubbed the Valley Fire. Officials expanded mandatory evacuations as shifting winds sent flames and ash toward a number of towns in the hills north of Napa Valley wine country.

Four firefighters were hospitalized with second-degree burns after they were dropped off by helicopter to battle the fire, which broke out on Saturday in Lake County, north of San Francisco, and exploded in hot weather and drought conditions.

Thousands of evacuees from Middletown, Cobb, Hidden Valley Lake and the Harbin Hot Springs resort gathered in shelters, restaurants and friends' houses in nearby Kelseyville and Calistoga waiting to hear about their homes, horses and dogs.

Mark Donpineo, 54, a project manager, said he and two friends were trapped by the fire for four hours Saturday evening at a golf course in the Hidden Valley Lake gated community.

"There was a little culvert or stream, with a bridge. We stayed there," he said. "We got some towels, wetted down them down, and basically saw the fire coming. You could hear explosions of propane tanks, the ridge was totally on fire, trees were blowing up."

'IT WOULD BE A MIRACLE'

The fire eventually moved on and Donpineo drove through falling ash to Kelseyville, where he was waiting for word about his friend's house in Hidden Valley, and about Harbin Hot Springs retreat, where he lives.

"My stuff is probably not OK," Donpineo said. "I hear the house we were staying at in Hidden Valley was burned but there is a lot of unconfirmed information. It would be a miracle if Harbin is still there. It was right in the path of the fire."

The Santa Rosa Press Democrat showed images of a burned-out Middletown, and residents of the rural town posted on social media, asking about their horses and dogs.

A school, blocks of homes, an apartment building and businesses were all destroyed in Middletown, home to some 1,300 people, according to media.

Fire officials did not confirm the number of structures burned and said 1,000 firefighters were working with bulldozers on Sunday to try to contain the flames.

"This is one of those fires that has been so fast moving," Daniel Berlant, public information officer for the California Department of Forestry and Fire Protection, Cal Fire, told CBS Sacramento.

The Valley Fire is the latest in a string of wildfires that have ripped through drought-stricken brush and forest on the West Coast.

Chad Greenwood, 44, a travel agent, said he grabbed his two dogs and a suitcase after sheriff's officers gave him and other residents of an outlying area of Kelseyville an hour to leave.

"Where I live the smoke smell was really bad. It was so dark it looked like it was 8:30 at night, at 7 o'clock in the morning," Greenwood said by phone.

Brown previously declared an emergency in rural Amador and Calaveras counties, where the Butte Fire began on Wednesday and has destroyed 86 homes and also forced evacuations.

Some 3,500 more people were evacuated on Friday from the path of the flames from a larger blaze, dubbed the Rough Fire, which is burning in Kings Canyon National Park in central California.