Thousands of Puerto Rican workers protest new austerity plan: 'All we have is our human resources' 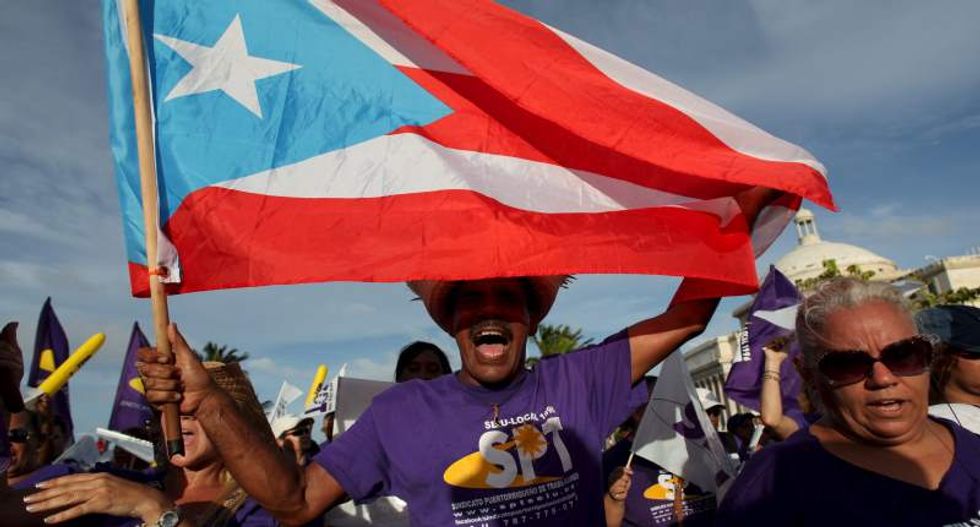 A member of a labor union shouts slogans while holding a Puerto Rico flag during a protest in San Juan on Sept. 11, 2015. Photo by Alvin Baez for Reuters.

Thousands of public sector workers demonstrated on Friday against an austerity plan to help pull Puerto Rico out of a massive debt crisis, saying the private sector should take more of the pain.

The island's government is calling for shared sacrifice, and concessions from citizens and investors alike, as it tries to lift itself out of a $72 billion debt hole.

But Puerto Ricans have already endured more than a decade of austerity, as the economy struggled in the run-up to the debt crisis. And many see the latest belt-tightening measures as disproportionately targeting workers and some of the most marginalized sectors of the U.S. territory.

"You don't revive your economy over the shoulders of those who will build it," San Juan Mayor Carmen Yulin Cruz, a vocal supporter of organized labor, told Reuters as she mingled with protesters streaming past her office.

Maruxa Cardenas, a parole board official and member of Puerto Rico's United Public Servants Union, said she believes there have to be other ways that the government can save money using the private sector and other measures.

"We hope to get the message across that we won't stand anymore cuts on the worker," said Cardenas, who joined in Friday's march from the Puerto Rico capitol building to the governor's ornate La Fortaleza residence, in San Juan's historic Old San Juan district.

The public servants' union represents 13,000 workers in the island’s corrections, transportation, education and other departments.

In its current form, the government's austerity plan does not drastically alter public services or call for cuts in investment in infrastructure.

No new taxes are being put forward, beyond those already legislated. But the government has already hiked the sales tax to record highs, among other unpopular measures, and the plan seeks to save $250 million a year by 2020 by closing some low-enrollment public schools and cutting teacher headcount through attrition.

Aida Diaz, president of the Teachers' Association of Puerto Rico, expects the school closures to take their heaviest toll in poor communities with little or no access to public transportation, where the number of dropouts is likely to rise.

The island’s heavily bureaucratic education system, administered through a single, centralized department, has long been a target of reform.

The government's economic overhaul plan also mulls cuts to subsidies for the University of Puerto Rico, which could result in closures. UPR President Uroyoan Walker said he was opposed to closing or consolidating any of the school's 11 campuses, but acknowledged "hard times are coming."

The austerity plan calls for savings of $622 million a year by 2020 by freezing collective bargaining agreements and banning new hires and pay raises. The island would also apply for a waiver from federal laws raising the minimum wage for workers aged 25 and younger.

"It's a race to the bottom instead of shooting for a more productive economy," Jaime Morales, city manager in seaside Cabo Rojo, on Puerto Rico’s southwestern tip, said of the government's plan.