TMZ paparazzo tries to ambush Hillary Clinton on $10 bill: 'Does Oprah have a chance?' 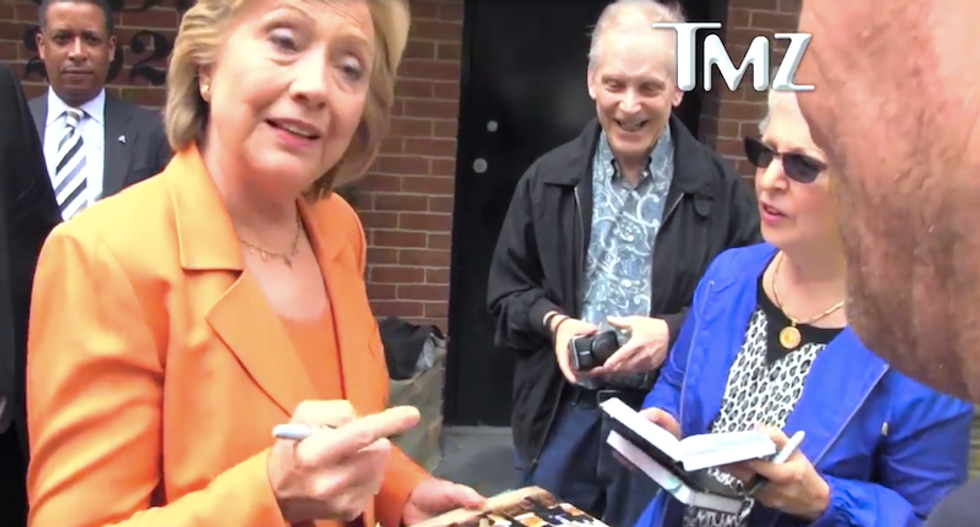 This is what a "gotcha" question actually looks like.

A TMZ photographer approached Hillary Clinton as she was signing autographs Sunday in Washington, D.C.'s Georgetown neighborhood and asked the Democratic frontrunner which woman should replace Alexander Hamilton on the $10 bill.

"Hillary, do you think Maya Angelou should be considered for the $10 bill?" asked TMZ's photographer Colin Drummond, who is known for ambushing -- or "stalking," according to Politico -- political figures and other celebrities in the nation's capital.

Someone off-camera suggests Rosa Parks, and Clinton briefly looks up from the paper she's signing to address Drummond.

"Well, there are a number of women -- you know, I was sort of amazed that the Republicans couldn't think of one American woman who could be on the $10 bill," Clinton says, laughing and then returning to signing autographs.

She was referring to a question at last week's GOP debate that found candidates scrambling to think of American women to honor on the updated currency.

Drummond asks who she would consider a good person to honor on the $10 bill as Clinton continues signing autographs.

"Oh, there's a lot of them," she says, as someone promises this would be the last autograph request.

"Does Oprah have a chance?" asks Drummond, who once sold a photo of the talk show host that purported to show that she had six toes.

"I think they said the person has to have already passed," Clinton says, looking up from her autograph and then laughing. "Obviously, we don't want that happening to her."

Drummond thanks Clinton for her time as she walks to a waiting car, and TMZ posted the video Monday morning with the headline: "Hillary Clinton Rips GOP for $10 Bill Gaffe ... Then Makes Her Own."

The gossip website argued in its writeup that Clinton had cracked the door "wide open" with her slam against Republicans who named foreign women or their wives, mothers or daughters.

"Watch what happens when Colin asks for that list," TMZ reported. "Lotsa crickets in D.C. this time o' year."

According to a report from the Daily Beast's Will Sommer, Eric Trump has admitted that he will give the keynote address at an anti-vaxx event in Nashville next month being run by a couple who have made their fortune pushing alternative therapies for cancer treatments while scoffing at vaccines.

The report notes that, in an email, the former president's middle son, confirmed his appearance, but claimed that he will use his appearance to praise and promote his father's legacy instead of talking about the effectiveness of the vaccines being used to save American lives.