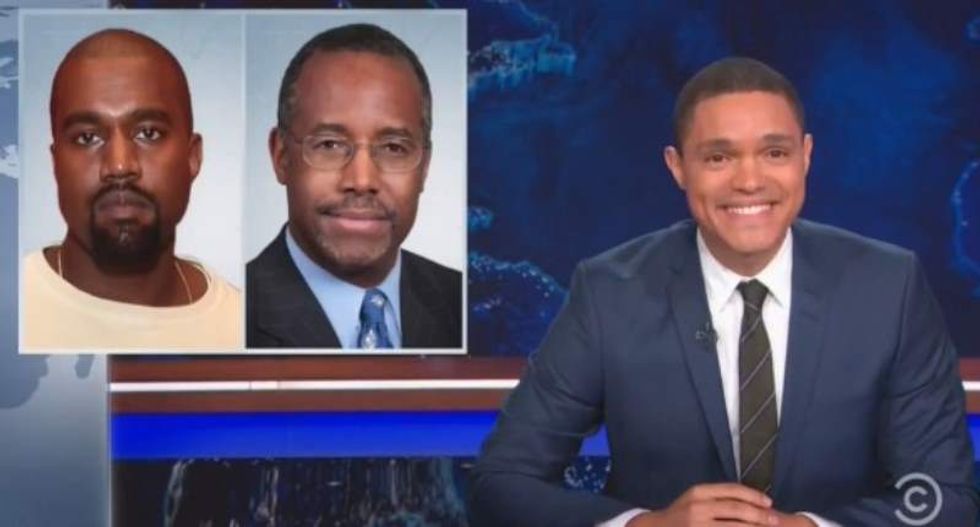 Daily Show host Trevor Noah took on what he called the latest political "panderdemic" on Tuesday, saying that neither Ben Carson nor rapper Kanye West know who they're trying to win over by gushing over one another.

"Kanye, man, do your research -- you can't just look for the black guy," Noah said. "You're picking a president, not who's on your basketball team."

Noah also played an audio clip of Carson, who has outpaced expectations in the GOP presidential field, saying that hip-hop was causing black communities to "continue to deteriorate."

"I'm sure Dr. Ben Carson can find something he likes about hip-hop," the host continued. "For example, the rampant homophobia. See? You guys have more in common than you think -- no homo."

As ABC News reported, West and Carson have publicly praised one another, with West calling the former Johns Hopkins neurosurgeon "the most brilliant guy" and Carson saying he was impressed by West's business acumen.

That kind of mutual-admiration society, Noah argued, was part of the election process, which he said involved finding out which older person could best pretend to like "young people things."

He also showed a clip of Sen. Marco Rubio (R-FL) awkwardly telling Fox News that he was a "West Coast" rap fan.

"You don't think Biggie [Smalls] and Tupac [Shakur] should have killed each other?" Noah asked sarcastically. "I'm glad you clarified that for us, because I was really fooled by your 'thug life' exterior, Rubio."