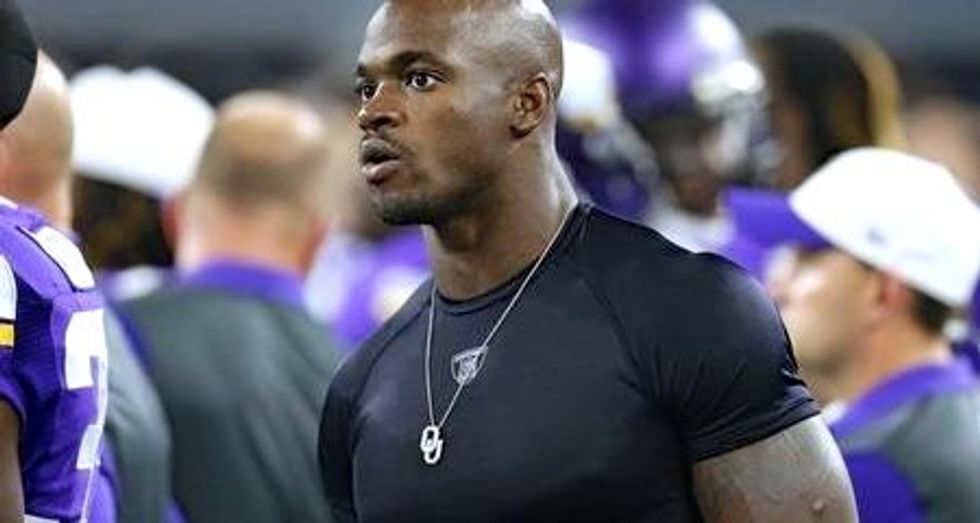 A South Dakota jury heard opening statements on Tuesday in the trial of a Sioux Falls man accused of killing the 2-year-old son of Minnesota Vikings running back Adrian Peterson in 2013.

Joseph Patterson, 29, faces a mandatory life sentence if convicted on the second-degree murder charge in the death of Tyrese Ruffin, who was the son of his girlfriend and NFL star Peterson.

"You'll hear how the defendant believed that Tyrese didn't like him, and how he believed Ty was afraid of him," it quoted Wollman as saying.

Police said they were called to a Sioux Falls apartment in October 2013 because Patterson reported he found Ruffin slumped over and unresponsive. Doctors determined the child's injuries were consistent with abuse, according to a police report.

Defense attorney Tim Rensch argued that Ruffin's swelling in the brain was the result of choking on a fruit snack while Patterson was in another room, according to reports from local media.

"Joseph Patterson did not strike this boy, did not slam this boy into anything," Rensch told jurors, according to the Argus Leader. "All Joseph did was to try to help him."

Peterson, a former National Football League Most Valuable Player, told reporters he had learned about Ruffin only two months before the incident and had been preparing to provide financial assistance to his son and the child's mother.

The running back met the boy for the first time at a Sioux Falls hospital shortly before his death.

Peterson, who did not attend the trial on Tuesday, returned to playing for the Vikings on Monday. He played only one game for the Vikings last season after he was suspended following child abuse charges involving his 4-year-old son in Texas that were eventually reduced to a misdemeanor.