Trump brawls with Rand Paul to open GOP debate: He shouldn't even be on this stage 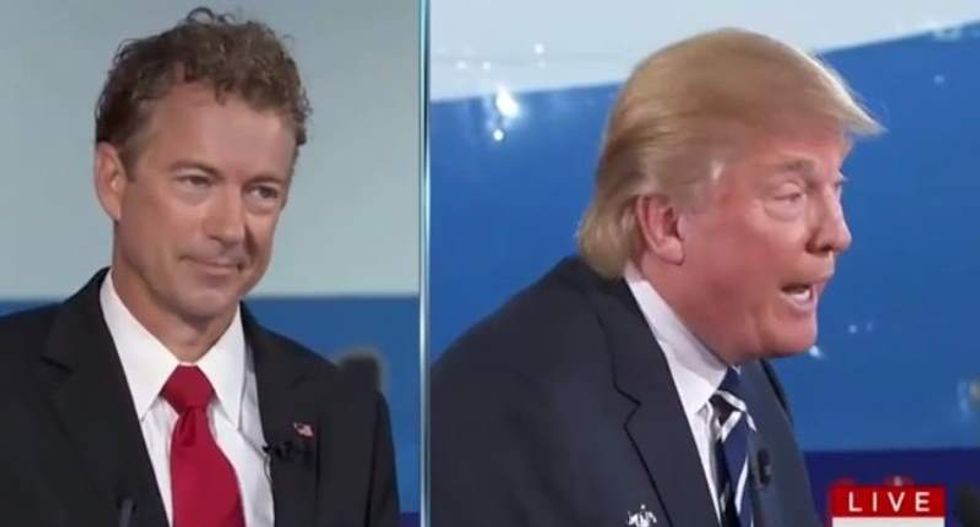 "Rand Paul shouldn't even be on this stage," Trump told host Jake Tapper. "He's number 11. He's got 1 percent in the polls. There's far too many people up here anyway. As far as temperament, I have a great temperament."

Tapper had started the debate with a question to Carly Fiorina regarding whether she felt Trump could be entrusted with the country's nuclear protocols. Fiorina responded by saying that was up to the voters to decide, setting the stage for Trump's attack on the Kentucky senator.

"I kinda have to laugh -- sounds like a non sequitur," Paul said when asked to respond. "He was asked whether or not he would be capable [of handling] the nuclear weapons, and all of a sudden there's a sideways attack at me."

The Tea Party senator then asked whether voters wanted someone using Trump's kind of "careless language" to negotiate with Russian President Vladimir Putin, and said there was a "sophomoric quality" to Trump that made him entertaining.

"I am worried; I'm very concerned about having him in charge of the nuclear weapons, because I think his response, his visceral response to attack people on their appearance -- short, tall, fat, ugly," Paul said. "My goodness, that happened in junior high. Are we not way above that?"

"I never attacked him on his looks," Trump said of Paul, before adding, "And believe me, there's plenty of subject matter right there, that I can tell you."

Watch the back-and-forth, as posted online, below.